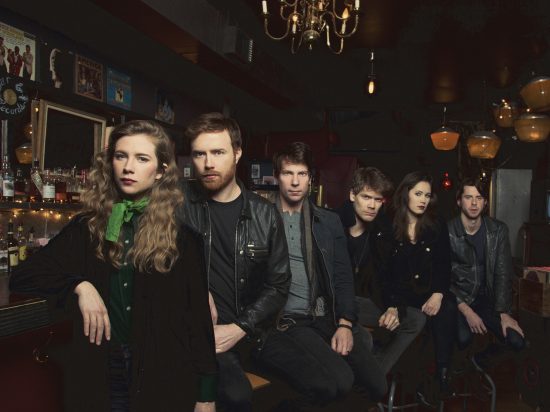 Matthew Angus doesn’t hate the United States—quite the opposite, actually. “It’s terrifying,” is how the primary visionary for Fast Romantics describes looking on from inside Canada at the ongoing spectacle unfolding in Washington, D.C. “Anyone in the U.S. who would challenge the notion that this affects all of us just doesn’t get it. It makes us feel even closer to our American friends, because it’s a grief state that we all have to go through.”

That dismay with political events south of the border led Angus to rethink the direction he was heading on his Toronto-based band’s latest release. “I realized that love doesn’t happen in a vacuum,” he says. “It happens despite all the chaos around us.”

American Love (Light Organ/Postwar) lives up to its title, delving into the real and imagined foibles and vagaries of falling in love in the 21st century. But it also drags the turmoil of an uncertain world order into the bedroom, where it messes the sheets, piss- es on the toilet seat and occasionally kills the mood. Ultimately, though, such broad strokes bring universality to the power of human connection—something that’s needed now more than ever. “We’re gonna die,  I  can see it in your eyes and you can see it in mine—it’s in the way that they shine,” sings Angus in his sultry Bryan Ferry-cum-Tom Jones lilt on “Ready For The Night.” “After that, I don’t know what happens, but I’m sure it’s all right.”

Chilling inevitability and unbridled optimism collide often on American Love, which was recorded over two years in Toronto and Brooklyn by Gus van Go and Werner F (Wintersleep, Whitehorse). The album’s lavish production is a grand-scale melding of slathered-on early-’80s synth drama and mid-’60s echo-chamber finesse that owes as much to Midge Ure as it does to Brian Wilson.

Angus founded a quite different version of Fast Romantics in Calgary with bassist Jef- frey Lewis in 2008, but the original lineup couldn’t hold it together after the release of intermittently brilliant 2013 LP Afterlife Blues. As Angus and Lewis worked on reinventing the band, Fast Romantics were generating buzz in Canada, winning 2014 pop group of the year at the SiriusXM Indie Awards and taking home the prestigious 2016 SOCAN songwriting prize for the irrepressible “Julia,” a new version of which appears on American Love.

The sextet’s most pronounced addition is multitalented singer/songwriter Kirty, whose sole contribution to American Love, “How Long Is This Gonna Last?” is also one of its most resonant moments. “Maybe on the next album, there will be more of Kirt,” says Angus. “She’s really infiltrated the sound and the spirit of my songwriting. It’s sort of like beauty and the beast.”