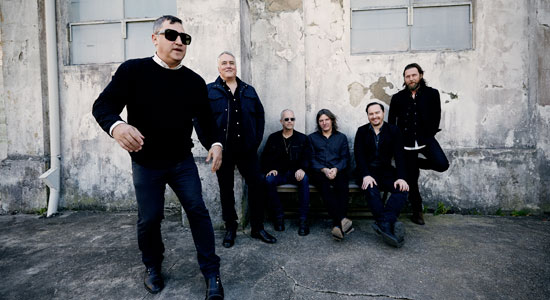 Although their soul influences have been well documented, the Afghan Whigs have always been at their core a guitar-driven rock ’n’ roll band. This was reaffirmed with “Parked Outside,” the opening track on their 2014 “reunion” record, which announced itself with a Godzilla-like riff and stomping backbeat. Contrast that with “Birdland” from In Spades, where the essential tools of the trade—guitar, bass, drums—are replaced with a string section. Suffice to say this isn’t your typical Afghan Whigs album. Indeed, listening to In Spades, one wonders if Greg Dulli finally decided that he wanted to make music as moody and dark as his pitch-black lyrical themes.

Judging by the sheer density of the sound, it seems Dulli (who also produced this record) has been taking calls from convicted killer and Wall of Sound originator Phil Spector. “Oriole” opens with a lone acoustic guitar, but soon enough there are bells, and then strings, and then rhythm section, and then … well, you get the picture. Similarly, “Demon In Profile” begins with a spare piano, but by the time the chorus hits, it’s horns and strings to the heavens. Despite this kitchen-sink approach, certain sonic elements start to sneak into your consciousness, whether it’s the Stevie Wonder-ish riff on “Light As A Feather,” the hypnotic rhythmic interplay on “Arabian Heights” or the central guitar figure on “Copernicus” (which, improbably, sounds cribbed from the Cult’s “Wild Flower”). Spades is a grower, as they say, only revealing its charms to patient listeners over repeated listens.