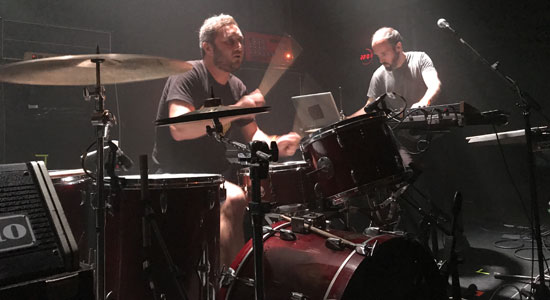 Rare are the gigs that successfully distill styles through a thesis/antithesis/synthesis triad. Tonight, Belgian duo La Jungle opens with a vibe that sets the spazzcore heroes in Lightning Bolt to turbo dance rhythms. Fellow Belgians It It Anita counters with a noise bath that recalls the grimiest of ’90s art punk. French headliner Electric Electric ably splits the difference, tenderizing Kkraut math experimentation with a hard-rock mallet.

The result is more than just a frenetic Trans Am or a family-friendly Atari Teenage Riot; Electric Electric triangulates the digital and the analogue, sweating euphoria through metronomic-yet-manic beats. With machine precision, the Strasbourgeois trio deploys electronics, blunt guitar riffing and repetition the way a masseuse employs whale song, oil and deep muscle kneading.

With “Minimal Maximal,” hard-hitting drums and trance coax the listener’s consciousness out of time and body. The combo could score a Philip K Dick film adaptation … or surgery to install neural implants. From latest album III, “Dassault” entices gently with a light beat, to which siren wails add a threat of impending calamity. The detached, monotone delivery of the vocals is deliberately blurry as to be detectable mostly at the subconscious level. “Klimov,” likely an homage to the Russian director of ’80s war film Come And See, is dancey and ominous and jagged all at once. Neither dejected nor joyous, the group’s sound is less cathartic than soothingly dehumanizing.

In a world where the insanity of terrorism is answered with the inanity of populist nationalism, perhaps the best (or, regrettably, the only) sane response is withdrawal within oneself. Unplug the mind and submit to the gaping void. Electric Electric demonstrates that a synthesis need not require the resolution of competing visions. It can be an acceptance that there are no good options.

Apart from escape into the hollow bliss of art.