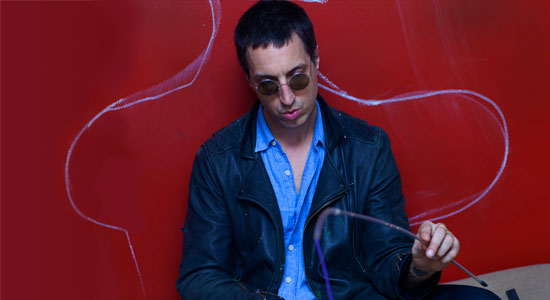 Ever since Peter Gabriel beckoned him to New York City, singer/songwriter Joseph Arthur has been compulsively creative. This year marks the 15th anniversary of Redemption’s Son, the Akron, Ohio, native’s third album of heavy melodies and mood-enhancing arrangements. It represents a point in Arthur’s career when he was a little too prolific; aside from the 16-track album, material from the sessions spilled out onto four subsequent EPs, and this year’s reissue of Redemption’s Son (Real World) adds nine bonus tracks. MAGNET is not the least bit surprised that Arthur took this month’s Feedback in his own direction.

My manager said, “Hey, I need that piece for MAGNET by Monday.”

“Oh, cool,” I replied. “I’ll knock it out. As long as I don’t have to write a Shakespearean play, I can’t imagine having a problem with whatever it is.” We were loose. It was Friday.

On Monday morning, I realized the guilt, shame and remorse for knowing I had boldly said yes to a lengthy writing assignment sight unseen and it was due today. The voices flooded in: “Why did you say yes?” The toxic shame, like an expert archer, took aim at the center of my skull as I opened the emailed assignment: MAGNET would like you to write about 10 or 15 of these tracks:

My palms got sweaty. My heart raced. A lifetime flashed before me. I got a case of the hiccups and peed my pants a little. I looked over the list. Oh, no! Please don’t say it’s one of these things where I gotta say how much I like this or that. I mean, I like “The Weight” as much as the next guy, but how am I gonna come up with a paragraph on it?

“I remember that time I sparked up a doobie, and it was a full moon, and it was our summer of love, and there were all these butterflies in the parking lot and we had just dropped acid, and it was coming on and we were out in your Corvette. You had the radio on, and the DJ on the classic-rock station we always listened to said, ‘And now this one is from Robbie Robertson and the Band.’ And then that song. That song that’s everybody’s favorite song at one point or another. Transcends race. Transcends time. A great song has a spirit in it. This one is so identifiable and profound that it almost feels wrong to speak on it. But it does make me want to take acid and drive around in a Corvette.”

Normally, I might call Greg Dulli in a time like this. He’s always got a good take on things, funny and dark, and then we just wind up talking about girls we are both in love with on Instagram. I remember the Afghan Whigs’ Gentlemen came out and I listened to it on my CD Walkman. There were beneficial limitations back then. You know how sometimes you lock a certain memory with a certain album? That album always reminds me of a flight I took and listened to it the whole trip. That was the good thing about not having endless options. It made you focus on one thing. I focused on Greg’s voice and lyrics. I was just starting to write songs at that point, so I listened with intention all the time. I was still forming my own musical identity. If I had to put my feelings about what Greg does in a quip designed for bathroom fodder, it would be this: He’s original. And he’s rock ’n’ roll. Plus, he’s from Ohio. Which I notice quite a few folks in this list are.

I texted my manager: “Hey, Keith, happy Monday. Gimme a shout on that MAGNET thing. It’s a real pain to write about songs. Can you imagine writing a paragraph about a Coldplay song? Or even about one you like?”

He didn’t and still hasn’t responded. Cheap joke on Coldplay. I don’t actually feel that way. Everyone knows Chris Martin can make melody his bitch in ways that are unique to him, and let’s face it: It’s endlessly appealing. Besides, no one’s ever gonna be cooler than the Replacements anyway, so who really cares? I guess the price of ubiquitous fame and fortune is that you become a punching bag for people in moments like these. I’d take that trade.

My manager never got back to me, so I decided to take a few bong hits and go skateboard. I ride my longboard along the Promenade in Brooklyn, overlooking the whole of Manhattan. From Red Hook to DUMBO and back again. For some reason, I had the Kiss song “Black Diamond” in my head. But not their own version—the version that’s on Let It Be by the Replacements. Neither of those bands were even on the list. I couldn’t just talk about any band I want all willy-nilly. There had to be some measure of control in this piece. I looked long and hard at myself when another Replacements song ran through my mind: “Unsatisfied.” But it’s not on the list, so why won’t this song leave me be?

“Look me in the eye and tell me that I’m satisfied/Are you satisfied.” Or however it goes. What’s with Minneapolis and the best songwriters in history? Dylan and Westerberg. Dylan’s on the list, but Westerberg’s not. Hmm. Pieces are adding up. Things people said. Fragments I had forgotten about. I started picking up things in the street and putting together a cap made out of tinfoil. But just then a song started blaring, as if the tinfoil hat had been a finely adjusted radio antenna picking up only one song, and it was screaming now as if it was coming from Manhattan itself. Like the buildings were all signing it to me all at once. And it was “Needles In The Camel’s Eye.”

I love weird rock songs by English geniuses. And this is one of the best. Why is the city singing this one? Eno’s on the list. I guess it triggered something. Now the Empire State Building is swaying back and forth to the beat. I’m frazzled at this point, like a fighter who’s beaten but just won’t stay down. I gotta get out of this. Need to write my manager and tell him I just can’t think of a creative way to write this piece.

“Tell them I said sorry, Keith.” Still waiting for a response.