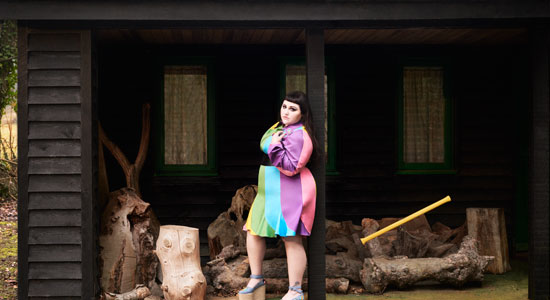 Beth Ditto is not a woman to suffer fools gladly. As forthright and incendiary in her conversation as she is in her role as frontperson for the Gossip since its 1999 inception, Ditto has long been a blunt force of nature when it comes to LGBT rights, marriage equality, politics and matters of female form, size and stature in fashion and the workplace.

“For me, it’s about punk intersectional feminism—an incredible movement to watch grow from the inside,” she says proudly. “I feel so lucky to be alive now and be part of a movement so dedicated and unapologetic about our bodies and open about our experiences.”

Ditto’s newest music, however, shows a different side to the mellow-harshing songwriter and baritone crooner.

“The record was already wrapped up before the election, so believe me, had it not been finished, it would’ve been on,” says Ditto, talking about the more subtle lyrical and sonic shadings of Fake Sugar, her debut solo album away from the throes of the taut, tough Gossip

After five independent releases and two major-label albums (her current home is Virgin), the Gossip called it a day. “There are things that have happened that I’m not sure will allow us to be a band again,” says Ditto. “In my heart it feels gone … Before, everything had come pretty easily, creatively speaking, of course. All of a sudden it felt like pulling teeth. So when the label suggested I work with different songwriters to make a Gossip record, I did, and of course, they weren’t Gossip songs. And I really was hard on myself about that. But it dawned on me how ridiculous that was. Of course they weren’t Gossip songs. But they were still really good songs.”

So after several years of trying to connect, Ditto didn’t. Instead of beating a dead horse, she decided to make her own record and texted her Gossip bandmates to that effect.

The Southern-inspired Fake Sugar, complete with twanging F-hole guitars and synthetic percussion, is rich in harmonies and the reality of romance rather than the soppy, storybook kind. The idea of Alan Vega—the late singer/screamer and abstract-impressionist lyricist of Suicide—comes up throughout Fake Sugar, as “Go Baby Go,” “Fire” and the whole twanging Southern Gothic-ness of the album is steeped in his brand of echo and caterwauling.

“I just wanted to do something a little special for him,” says Ditto. “He is an icon, and I needed to point that out.”

Asked if songs such as “Lover” (“about a feeling of independence”) or the album’s other tales of relationships are about Ditto’s new wife, she says, “I don’t really know. I think they’re mostly songs about my internal dialogue about trust, traveling, lifetime commitment. Also, I love to hear the interpretations journalists and listeners have. Sometimes they’re more spot-on than mine.”

The softer spots and handsomely manicured harmonic layers on songs such as the title track, “Savoir Faire” and “In And Out” feel lived in rather than brand new or freshly formed. It’s almost as if Ditto had been planning to explore these sounds even before Fake Sugar.

“I feel like really I could do that in the Gossip, too,” says Ditto. “But the songs just kept never happening. I wouldn’t say it was something I’d been waiting to do as much as a Gossip record just wasn’t coming to fruition, so I just let go of any Gossip sound limitations. I learned to trust myself and to trust other people outside of my group of nearest and dearest. For so long there had been two people I could always rely on. There was a consensus of people I knew since childhood and developed a language of music and aesthetic. Humor. All those things. A real family. Making this record was like learning to love again. Does that make sense?”