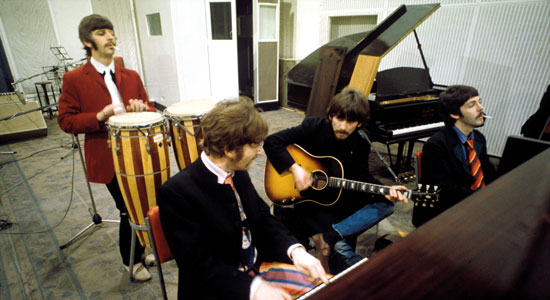 Surveying the Summer of Love that birthed Sgt. Pepper, there were certainly albums of equal (or greater) challenge to be found in Cream’s Disraeli Gears, Love’s Forever Changes, Jefferson Airplane’s Surrealistic Pillow, the Jimi Hendrix Experience’s Are You Experienced, the Velvet Underground & Nico’s eponymous debut and Bob Dylan’s John Wesley Harding. In comparison, the Beatles’ 1967 epic sounds tamer. The band’s psychedelic revolution was founded with 1965’s Rubber Soul, and its sonic mindfuckery came later with 1968’s The White Album. Listening to the utopian vision of “All You Need Is Love” amid those other artists’ viewpoints of protest, drugs, fidelity, psychology and sex, and the Sgt. is soft.

Yet it’s also supple—which is the most fascinating aspect of the Beatles’ theatrical vision of quaint, occasionally cutting (the desperation of “Fixing A Hole,” the House of Lords politicking of “A Day In The Life”) English pop/psychedelia. This anniversary edition in 5.1 surround sound is a six-CD version containing unreleased tracks from 400-plus hours of sessions in Abbey Road’s Studio 2 with producer George Martin.

Kudos here go to that studious mixologist’s son, Giles Martin, whose fresh, shimmery, bottom-rich takes on old and vaulted material are a revelation. It opens up the hidden sluices of timeworn material such as “She’s Leaving Home” and “Lucy In The Sky With Diamonds” (unreleased early mono mixes, the latter feared erased) and even cleans up the sound on Blu-ray viewable promotional films for “Strawberry Fields Forever” and “Penny Lane,” both of which are restored to Sgt. Pepper’s once-intended playlist. Neither a relic of the past nor a portent of a psychedelic future, this shining-up of the Sgt. Pepper grail is gorgeous. A splendid time is guaranteed for all.