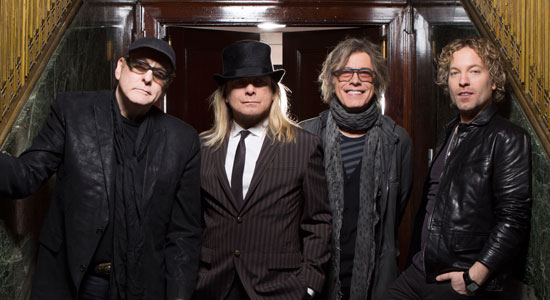 Midwestern heroes Cheap Trick rose alongside punk, sharing similar values without joining the spiky tumult. Rather, the band wed the Who’s arena-busting power chords with the Beatles’ smart popcraft, a wicked sense of humor and an odd anti-image (glamorpuss singer and bassist, a spastic Huntz Hall on lead guitar and a rumpled, chainsmoking accountant on drums). Instant classics such as “I Want You To Want Me” made huge stars out of them when recorded live in Japan, though they wouldn’t really make a dent in the charts again until cutting corporate power ballad “The Flame” under label pressure. Revered as history’s greatest and most successful power-pop band, the Trick still packs any venue booked on a seemingly perpetual tour schedule.

After 18 studio LPs, Cheap Trick fittingly references signature anthem “Surrender” in titling We’re All Alright!. Coming hot on the heels of last year’s Bang, Zoom, Crazy…Hello and sustaining the creative streak they’ve been on since the mid-’90s, it proves the wisdom of going independent and listening to your inner voice rather than some corporate A&R man. From Kinks-like riffer “Long Time Coming” to cuts that resemble John/Paul/Ringo/George taking delivery of Marshall amps (“She’s Alright” and “The Rest Of My Life”), Cheap Trick sticks to its strengths: Rick Nielsen’s brash chording, sick leads and keen songwriting smarts, son Dash’s nimble drumming, Tom Petersson’s zooming bass and Robin Zander opening up one of the strongest, most expressive throats in rock ’n’ roll. As always, the perfect distillation of power, melody and “what the fuck?” spontaneity.