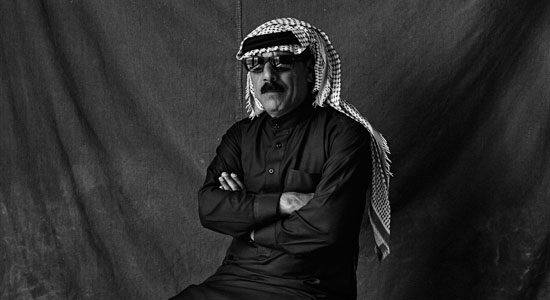 Syrian vocalist and crossover electronica performer Omar Souleyman may not be the most accomplished singer on the world music/techno festival circuit. Certainly, he’s caught flak from some among the world-music culturati in his home country who suggest his style is lowbrow, his technique unsophisticated, even crude. You know who else wasn’t a great vocalist? Joe Strummer. Listen to “Ya Boul Habari,” the first track from To Syria, With Love, pay attention to Souleyman’s vocal timbre, and you’ll hear the similarity—a throaty, raspy, front-of-the-mask delivery that seems to wrap around the melody while retaining a striking timbric distance from it, a kind of sweet-and-sour combination that goes a long way toward roughing the edges of Souleyman’s synth-heavy techno.

Understand that we’re talking tone here, not content. But you also get the feeling that a no-frills guy like Strummer would have appreciated Souleyman most unironically. Souleyman used to be a day laborer until his late 20s, when he began singing semi-professionally at weddings in and around his home village of Tell Tamer in northeastern Syria, near the borders of both Turkey and Iraq. Souleyman doesn’t care much for the notion of borders, though—national or aesthetic. His own musical style draws from conventional, even traditional, Middle Eastern melodic patterns, sequenced and filtered through a variety of keyboard and drum effects and informed by a blend of national and cultural influences: Kurdish and Turkish, Christian and Arabic, techno and folk. Or maybe even that bare description is a gloss on borders, where Souleyman genuinely sees none at all.

“My music is very traditional,” he insists via translator. “I carry the tradition of many generations of this music from my region. To you, maybe that is a blend of forms, but to me, this is just how (the music) is. Our music has developed this way, and we keep with it.”

Even the technical advances of the modern era, according to Souleyman, have been adopted with an eye toward keeping the lines of descent intact: “Live instruments that might have been used before are now all inside of electronic keyboards.”

Like any soul singer—and make no mistake, within his idiom, that’s precisely what he is—Souleyman works within a focused range of topical matter: Love and domestic concerns make up the bulk of his lyrical output. But as the title of the new record suggests, the impetus for the music on this album derives specifically from the heartbreaking state of affairs in contemporary Syria under Bashar al-Assad and the ongoing civil war that has damaged and displaced countless Syrians since the Arab Spring of 2011. In that regard, To Syria, With Love, out on DJ/production wunderkind Diplo’s Mad Decent label, is an unabashed, unapologetic love letter to both his home country (Souleyman currently resides in Turkey) and his countrypeople.

“It is my offering, and my gift to my people—wherever they are in the world, whether displaced somewhere or in Syria, and to all, without any exception,” he says. “The album is not too complicated; there are two songs where I sang, first of all, of my pain at seeing how we look for our homeland hopelessly for six years. We miss our way of being at home, and being away and not knowing when we will return is also painful.”

Is the album intended as a statement on contemporary Syria? A comment? A tonic?

“I think it might be all three,” says Souleyman. “I often wonder how it is that we in the Middle East have to live through so many troubles and conflicts, and always fear for our lives and the future, whereas I always travel to see people in the Western world and others living in peace and harmony. How and whom music reaches is very random. I do not know if music can reach people (especially well) who are in despair. Depends on its message.”