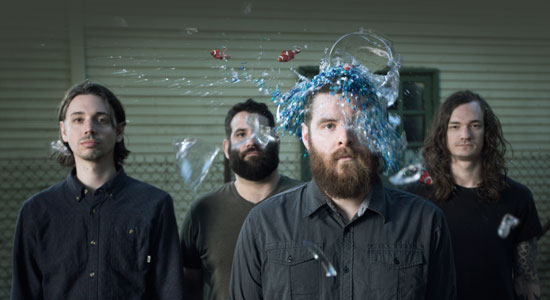 Influence comes from many sources, but only Manchester Orchestra can claim its new album, A Black Mile To The Surface (Loma Vista), was partially inspired by a farting corpse. After completing 2014’s dual releases Cope and Hope, Manchester frontman Andy Hull and guitarist Robert McDowell began work on the soundtrack to Swiss Army Man, featuring Paul Dano as a castaway and Daniel Radcliffe as the title character, a cadaver whose body is utilized by Dano in a variety of ways, including as a post-mortem gas-propelled speedboat. The film’s directors insisted Hull and McDowell create the soundtrack completely a capella, an interesting and evolutionary challenge.

“That was almost a deconstruction of the way we were used to doing things,” says Hull. “We’d never done anything like it before, to only use human voices and sounds for percussion and learning how first instinct isn’t always the best. Sonically, we got all these new ways to create sounds. If we did this effect on this Swiss Army Man vocal that makes it sound all crazy and not like a voice, what if we threw that on a guitar pedal or an old organ? We were researchers of tones and sounds for this record.”

Stripping everything down to its elements provided the perfect launch point for Black Mile. Hull was already thinking in terms of streamlining the Atlanta band’s sound after the prolific volume of Cope led to acoustic alter ego Hope, and Swiss Army Man provided a blueprint and material for the new album.

“We did 90-plus minutes of music, so many different versions of things,” says Hull. “It was like school in a cool way. I felt like I’d learned some new things I never would have gotten the chance to learn without it.”

Black Mile’s introspective themes and compelling music were also triggered by Hull’s freshly minted fatherhood. With Cope, he was clearly growing and maturing as both a musician and a person, but his new material, from the Avett Brothers ache of “The Maze” to the contemplative, Jeff Tweedy-meets-James Mercer heartbeat of “The Alien,” finds Hull writing from a new perspective.

“With Cope and Hope, I felt those were mission and life statements, like, ‘I’m turning into an adult here,’” says Hull. “It was a bit of a relief and, at the same time, still a darkness. On this one, I wanted to go real deep, and that had to do with being a new father and that shifting of my outlook and personal value. Your rank drops a few after that.”

A good deal of Black Mile was written by Hull with a sense of urgency. He had skeletal material on his phone that he played for McDowell at the end of Swiss Army Man, and the two selected the best material to flesh out. “I thought, ‘I recorded that a year ago, I haven’t listened to it since and I’m still singing it,’ so I went with that,” says Hull.

While Black Mile represented a rule-breaking project for Manchester, there was one edict that all the band members observed. “We had a rule that a song isn’t done until we’re jumping up and down,” says Hull. “It was months of trying to get them there. I’m really proud that it sounds like us, but doesn’t in a way.”