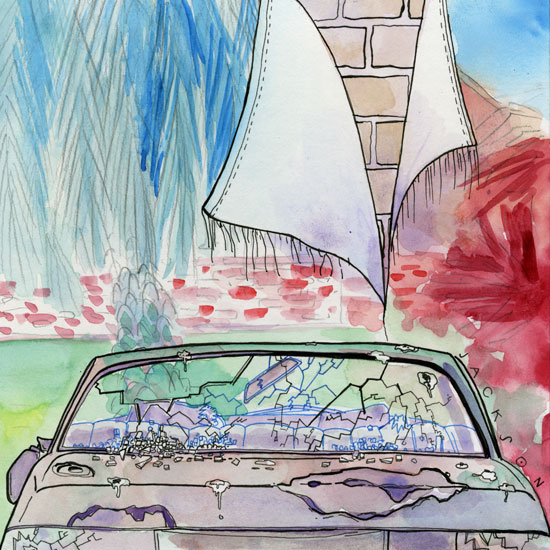 Welcome to the club, Arcade Fire. You’ll get to like it here.

The Canadian band has always annoyed the living shit out of me. They were overpraised from the very beginning and handed Grammy awards for the kind of record that normally hopes for nothing more than a decent review in MAGNET or Pitchfork. But Arcade Fire was different, hailed as geniuses based on no evidence that I could see and granted enormous audiences based on even less.

Our worlds intersected whenever I heard them on the radio, usually on Philadelphia’s WXPN. The DJ would be gushing about this brilliant new Arcade Fire track and then would play the latest limp and boring slice of the band’s latest limp and boring CD. I would sit there trying to figure out how I could be so wrong about a band that was obviously so brilliant, so precocious, so very special. It had to be me, right?

Don’t get me wrong. I wasn’t hostile toward the band. When they won that Grammy for album of the year, I was incredibly happy for the people at Merge Records. They shared in that triumph, and they deserved it for their long and meritorious service in the name of punk and indie rock over many previous years. Would I have rather seen literally any other Merge band win before Arcade Fire? Well, yes, I would. But you can’t pick lottery winners. It just doesn’t work that way.

Arcade Fire won the lottery. It was luck, some combination of releasing a good record the same year the Grammy voters realized how ridiculous they looked giving their top award to Beyoncé every year. And it was a good record, about on par with maybe two dozen other albums made by rock bands that year. It just sounded fresh to a bunch of critics who need to spend about 1,000 hours re-learning the classics before writing a single new review. Those critics gave the Arcade Fire album momentum, and the Grammy folks were quick to spot that momentum and jump on the train.

Since then, the band has continued to release records and reap the benefits of that old momentum. The critics automatically cream in their jeans and hail them as geniuses. The fans automatically buy the albums and go to the concerts.

And then came Everything Now, the band’s new release. Suddenly, the critics were sharks and Arcade Fire was oozing blood into the water. Not only was the album getting killed by critics for sounding exactly like an Arcade Fire release, the band was doing all kinds of un-brilliant, un-precocious, un-special things to promote it. They famously announced an assholish dress code for their record-release party (no shorts!). Then they appeared on The Late Show With Stephen Colbert as part of a fake promotional campaign for a fake company called Everything Now. It appeared to be a sly joke that wasn’t even remotely worth getting.

Speaking of which, Arcade Fire’s website offered the new album on a USB-compatible fidget spinner for $109. There’s a chance there was no such fidget spinner—it “sold out” almost immediately. But that was actually perfect marketing, since a fidget spinner is precisely the kind of useless piece of overpriced crap that stands as a perfect metaphor for Arcade Fire. The critics didn’t like that, either.

Here was Arcade Fire, the too-cool-for-school kids tripping all over their own dicks like idiots. Like the Replacements or something.
And suddenly, I started to like Arcade Fire.

OK, not their music so much. They still come through the speakers like tepid piss. Only now, no one is talking about how incredible I’m supposed to think they sound. The DJ plays it and moves on to something better and fresher sounding. Without all the hype, Arcade Fire is just another band trying very hard to sound interesting and coming up short.

But at least I can like them on those terms. I don’t want to rush out and buy Everything Now or support the fake company that promoted the band on Colbert or order a brand-new fidget spinner. In fact, I never want to use the term “fidget spinner” with a straight face again. I don’t have to listen to Arcade Fire and wonder what makes them sound better to everyone else than Spoon or Wilco or the National or the Mountain Goats or Okkervil River—bands that I have liked exponentially more than I’ve liked Arcade Fire during the last decade.

I think again of the Replacements, who were kind of the exact obverse of the Arcade Fire dynamic. All they did was make perfect punk/pop songs that were greeted with near universal neglect and disdain. Nobody was giving them the equivalent of a 9.0 on Pitchfork or introducing them as geniuses on the radio or handing them Grammy awards 10 minutes after they showed up.

No, the Replacements spent their career looking for one break like Arcade Fire got every single step of its way. That break never came, so a band that was 100 times as special and brilliant as Arcade Fire got to spend a decade or so in abject frustration trying to get the attention of a world that just wouldn’t care.

And the Replacements were followed by dozens of other bands who were similarly gifted and similarly ignored. I loved many of them and listened to them intently while the world heaped praise on music that wasn’t a tenth as worthy.

Then along came Arcade Fire, flipping that classic paradigm on its head, a band that got Everything Now and acted as if it knew it deserved every accolade. And it wasn’t as if justice was finally being done. It was just another miscarriage, just another injustice, just another fidget spinner.

Now the wheel has turned. Welcome to rock ’n’ roll, Arcade Fire. Don’t get too comfortable.