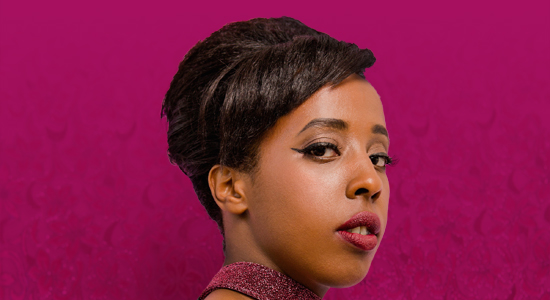 Ladan Hussein, the woman who records and performs as Cold Specks, is quietly intense. On Fool’s Paradise (Arts & Crafts), her third album, Hussein’s music is stripped down to the essentials. Soft, mournful synthesizers drift through a melancholy space, with elusive percussion accents in the background. Her hushed, jazz-inflected vocals are full of passionate yearning, the sound of a soul on the verge of tears or explosive anger.

“This is a deeply personal album,” says the Toronto-based Hussein. “It deals with a variety of topics from self-love, identity and diaspora dreaming during the apocalypse. I wrote most of the record in a period where I was feeling as though I needed to detach from the world, for the sake of my own sanity. The album is a brutally honest document of it all. The songs are all autobiographical—the anguish of the diaspora, migration, the struggle of refugees, racism, heartbreak and death. It’s all in there. Obviously, there’s quite a lot of darkness around, but I’d like to think I found some light, that I brought some beauty from the ashes.”

Hussein’s parents were born in Somalia. They moved to Canada before she was born. When she left home for university, they thought she was studying to become a lawyer but, growing up, she discovered jazz, pop, R&B and Canadian folk music. She dropped out of college to play guitar, write songs and make demos. When a friend passed a tape to a producer, Hussein’s impressive singing and songwriting won her a recording contract. She moved to London to record her subtle debut, 2012’s I Predict A Graceful Expulsion, an exploration of depression and anxiety that earned rave reviews and a Juno (Canadian Grammy) nomination for breakthrough artist of the year.

While second album Neuroplasticity was louder and more abrasive, Fool’s Paradise returns to the sound some critics have dubbed “gothic doom gospel,” a term Hussein doesn’t relate to. “Those words have nothing to do with anything I do,” she says. “I’m black with a raspy voice, but I’m a Muslim girl from Toronto. I know nothing about gospel.”

The album was put together slowly, with Hussein and Jim Anderson, her producer, paying close attention to tone and nuance.

“I wanted to keep the sonic elements stripped back to the absolute core essentials, then wrap my voice around it all,” she says. “I began demoing the songs this way. The original plan was to gather a collection of musicians and rework them, but I fell in love with the original sound and kept rolling with it. Analog synthesizers, drum programming, bass lines and lots of singing. I’m pretty controlled these days. I like that better. I used to just scream.”

Following a year of not writing any new music, Hussein is currently in the studio working on her next album. “I didn’t think I had anything to write about, but these are dark times,” she says. “Shit just seems to want to flow.”