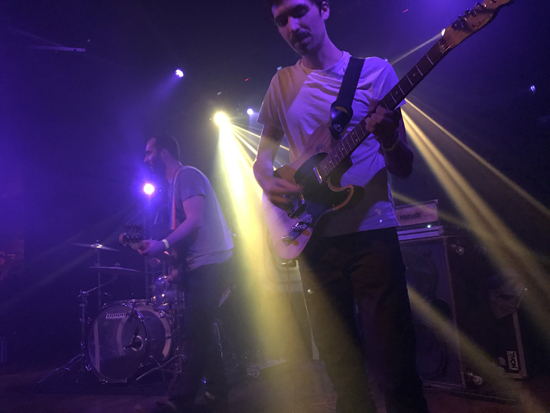 With guitars skipping and hopping like a scat improv, instrumental French quartet Totorro leaps from one motif to the next, in the playful manner of a festive Poster Children—no, perhaps a more muscular fIREHOSE—wait, a Giraffes? Giraffes! with less pronounced ADHD. Each song is exhilarating and bouncy, a rollercoaster thrill ride but with no real danger. The twists and turns shoot off in every direction, yet with a precision that reassures the sonically queasy.

Tonight there is, we are told, reason to celebrate. This gig is the band’s 100th—of the year? ever?—so the group raises champagne glasses in its own honor. Bassist Xavier Rosé confers dime-store medals onto individual crowd members as if emceeing a children’s party. The laureates accept their awards with mock reverence. A cardboard cactus backdrop (a visual allusion to the group’s frisky Come To Mexico from 2016) bestows a fun-in-the-sun vibe to the proceedings.

“Brocolissimo” and “Saveur Cheveux” are lively and silly and carefree jaunts through indie, math and post-rock. Set highlight “Gérard Blast” burts with a sweaty vigor; its dramatic stops, pregnant pauses, delirious divergences throw the crowd into a friendly frenzy. Like cartoonist Al Jaffee’s Mad magazine fold-ins, the performance spirals and coils and spins back onto itself. Its lighthearted touch thumbs a proverbial nose at post-rock’s staid anti-conventional conventions.

The group’s qualities are manifest: humor, creativity, energy, excitement. And yet, as with satirist Jaffee, its greatest value may be its ability to diffuse post-rock of its—Rosé takes a hearty and ironic swig of champagne, pinkie akimbo, before asking the house to dial down the strobe lights, preferring to forego their—insufferable pretensions.