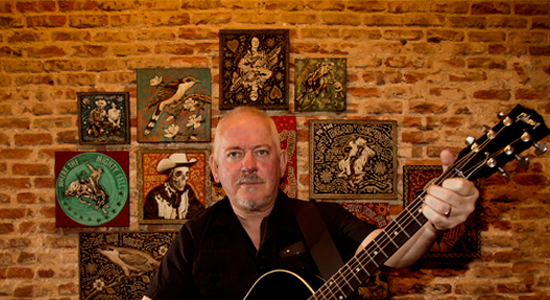 Jon Langford releases albums at a feverish pace, whether under his own name or with one of his myriad bands, from the still-active Mekons, who debuted 40 years ago, to the Waco Brothers to Bad Luck Jonathan, whose first LP arrived last December. Solo album Four Lost Souls, though, is something unique: He recorded it in Muscle Shoals, Ala., with veteran session players from the late ’60s/early ’70s, and he brought along singers Bethany Thomas and Tawny Newsome and guitarist John Szymanski from his Chicago hometown. The album credits say, “File under: SECULAR GOSPEL / NOO-WOP,” but the sound works variations on the blend of R&B, country, soul and rock ’n’ roll that flowed from north Alabama (and Memphis) nearly a half century ago.

Langford’s always had a historical perspective, but he usually works with his contemporaries. The guys in the band—steel guitarist Pete Finney, piano/organ player Randy McCormick, guitarist Grant Johnson, bassist David Hood and drummer Justin Holder—may not be familiar names, but individually they’ve worked on classics from the likes of Paul Simon, the Staple Singers, Percy Sledge, Bob Seger, Etta James and Willie Nelson (and Hood is father to the Drive-By Truckers’ Patterson Hood); producer Norbert Putnam played with Elvis Presley and the Flying Burrito Brothers.

While some songs overtly address the South, and the shared lead vocals with Thomas and Newsome often bring a soulful, bluesy flavor, Langford hasn’t gone out of his way to imitate the Muscle Shoals Sound. It’s easy to imagine “Half Way Home” or “Snake Behind Glass” as Waco Brothers songs, and Langford nods to his Welsh roots with an allusion to Dylan Thomas.

There have been many very good Jon Langford albums; this outlier is one of the best.