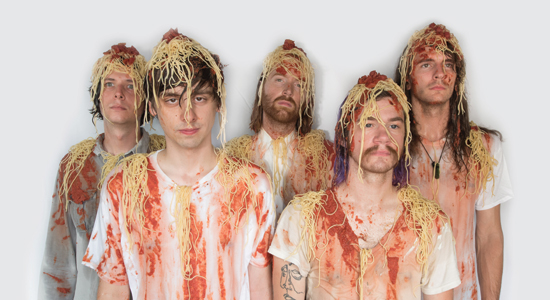 Speaking of making music in Shamong, a sparse township at the mouth of New Jersey’s huge, desolate Wharton State Forest, Pine Barons guitarist Brad Pulley says, “It felt like we were the only ones doing something like that in our neck of the woods. In our high school, there was maybe another band or two, but they were doing pop/punk and hardcore.”

Abrams and Smith had been kicking around in various projects since grade school but didn’t play a ton outside of their parents’ homes; they knew Pulley from their world of rural Garden State creatives. But is that, like, a big scene? Practically in unison, the band members shake their heads and exclaim, “No!”

There were no all-ages venues or cool record stores to congregate around; kids got their culture a half hour away at the Cherry Hill Mall. Or at home.

“I think it was just the internet,” Hower says of finding the artists who inspired them. “When I started hanging out with these guys, they were the first people who I realized, ‘Oh, you guys like this kind of music, too.’”

But that creative isolation brought the like-minded players closer together than they might’ve been in a more saturated, scenester-y urban community. U.S. tours with the Districts solidified their bond, and some familial influence further opened their ears. Pulley’s older brother Kyle plays in popular punk outfit Thin Lips and also recorded The Acchin Book at his Headroom Studio in Philly.

“When I was in middle school, my brother had bands that played in the city, so I always had an idea that that’s something I wanted to do,” says Pulley. “Having an older sibling who is into music is great; you kind of inherit what’s cool before the kids your age get into it.”