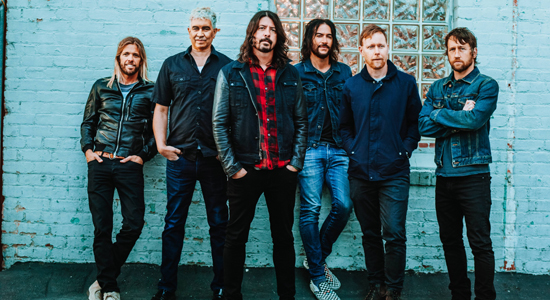 Without bothering to apologize for any perceived punning, never mind Dave Grohl and Pat Smear’s hardcore, noise-punk pedigrees any longer. Don’t bother with Kurt Cobain or Darby Crash. Those days are gone. On this, the ninth studio album from Foo Fighters, the guitarists (and whisper-to-screamo-singing Grohl) go whole hog for arena-sized rock, shiny punk, buoyant Beatles jangle and rough-edged soul—to say nothing of big, sweaty emotions—without apology or worry about alternative genre-fication. Grohl and Co. are as mainstream as Imagine Dragons, alt-J and the National (yes, them, too), and without apology, finally. No band with such huge, ooey-gooey choruses such as the one that graces “Run” can dare adhere to any other religion than Orthodox Rock.

So now, with a little help from drummer Paul McCartney (“Sunday Rain,” with its quavering White Album vibe), background singer Justin Timberlake (the spaced-out “Make It Right”) and Adele producer Greg Kurstin, the Foo sextet has made its hardest, yet most curvaceous and warm-blooded record to date. Filled with glossy-flossy punk (“La Dee Da,” “Arrows”), ambient metal (“The Sky Is A Neighborhood”), circle-jerk guitar histrionics (“Dirty Water”) and enough unsubtle, wide-eyed and wooly refrigerator-poetry lyrics from Grohl to sour a chocolatey-sweet Whitman’s Sampler, this is the Foos after having stopped fighting and learning to love who they’ve become. Is that settling? Maybe. Yet Grohl cops to that very retreat when he gently sings the lines “I don’t wanna be king/I just wanna sing a love song/Pretend there’s nothing wrong/You can sing along with me” as if shilling for Coke and a smile.