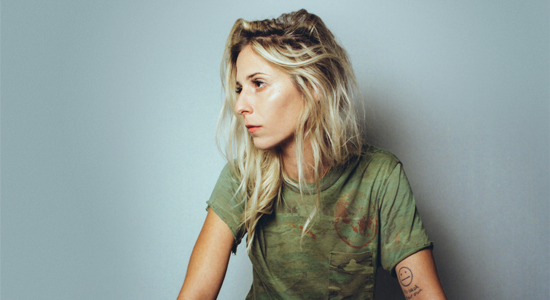 On Losing, Bully returns with songs of love and loss (or beating on yourself)

Bully deals with raw emotion, delivering songs that delve into a wounded psyche with an intense energy that can put a crowd into an altered state. Alicia Bognanno, the band’s singer and songwriter and one of its two guitar players, has a striking presence: a shock of blonde hair and a voice that can go from a whisper to a shriek of despair in a heartbeat.

“My volume depends on what’s going on in a song,” says Bognanno. “If we’re playing a longer song, one that has complex instrumental parts, that gives me a lot more freedom to move around onstage, and it’s more inviting to scream. There’s no rule, though. It just depends on whether I feel like screaming or not screaming.”

Bognanno produced sophomore album Losing (Sub Pop) at Electrical Audio in Chicago. Second guitarist Clayton Parker, bassist Reece Lazarus, drummer Stewart Copeland (not the former drummer of the Police) and Bognanno cut the basic tracks live, direct to analog tape. “Analog has a limited number of tracks, so you’re forced to play with commitment,” says Bognanno. “We brought in a bunch of pedals and had some new pieces of gear introduced to us on the engineering side, so we figured out our tone, took notes and got organized. With analog, you can’t manipulate a bunch of stuff in the editing. I don’t like having the endless possibilities at my fingertips you have in the computer. I like being forced to work with what we have and move on.”

The result is an album that captures the immediacy of the band’s live show. Tunes include the ferocious punk passion of “Either Way” and the droning, deadpan humor of “Blame,” an unrequited love song with Bognanno playing hide-and-seek with the object of her affection. A highlight is the slow, grinding irritation of “Hate And Control,” a track that addresses the friction that can arise in a relationship when a woman speaks her mind.

“The album deals with a loss, in a lot of different situations,” says Bognanno. “Some songs ask if you’ve lost yourself, or the person you thought you might have been. You can get stuck in a discursive mind frame if you don’t have an appreciation for yourself, or your feelings. There are songs about romantic relationships that are dissolving, and losing friends you love as well.”

Although Bognanno writes all the songs, the other band members help bring them to life. “I may present melodies and ideas, but after they’re shown to everybody, they’re free to move things in the direction that suits them best,” says Bognanno. “Everybody’s contribution is there in every song.”

As for the band’s enigmatic name, the quartet decided on it shortly before it started performing live. “‘Bully’ was one of the first songs we wrote,” says Bognanno. “We were going back and forth about using it, but it’s obvious from the songs that we’re not a pro-bully band. You’re your own bully, which is what a lot of the songs talk about.”