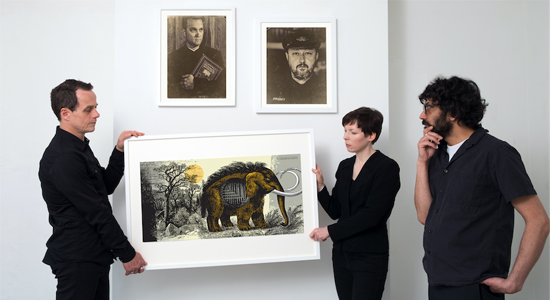 Although it fit in with woozy, beloved contemporaries such as Grandaddy’s Sumday and Sparklehorse’s It’s A Wonderful Life, Flotation Toy Warning’s Bluffer’s Guide To The Flight Deck managed to slip through the cracks when it came out Stateside in 2005 (after being released the year before in the London quintet’s homeland). But those of us who loved it really loved its deeply layered mix of carnivalesque instrumentation, gradually shape-shifting tempos and multiple voices—from singsong, filtered melodies to operatic soloists wafting in the background. Long-awaited (by a few) second album The Machine That Made Us is a worthy sequel. The band has retained its gift for creating grandeur by weaving together small, distinct elements. Something’s always burbling in the background of Paul Carter’s subdued, declamatory rhymes, which are sometimes sweet, often bitter. “I don’t have much time/None of us really do/So I’m fucked if I’ll be spending it with you,” Carter sings liltingly on “Everything That Is Difficult Will Come To An End.” Here’s hoping people spend some time with Flotation Toy Warning this time.