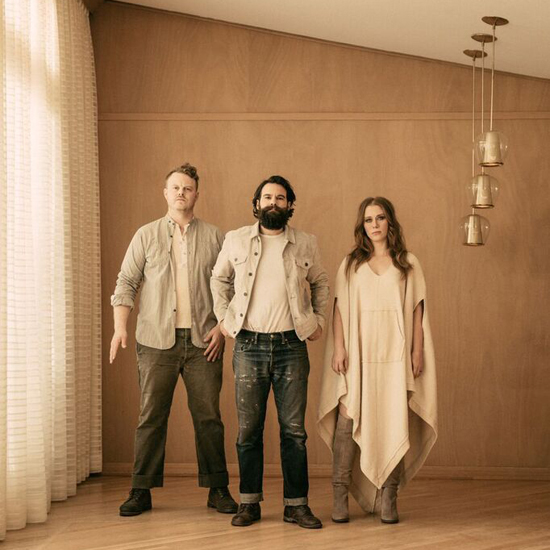 Spurred by a change in scenery, the Lone Bellow breathes deep and expels its best album

For a band prone to solemn—if emotionally generous—reflection on life’s struggles, the Lone Bellow has been known to let loose, especially when it involves fans and friends. Hence the hearty laughter prompted by the mention of a rather colorful mutual acquaintance we’ll call Vern. “He’s the brother-in-law of a really close friend, and he’s been able to get backstage at our concerts with this huge laminated sign hanging around his neck that says ‘The Lone Bellow’ on it,” says bandleader Zach Williams. “We were out with Ben Folds back in the day, and we stayed at Vern’s house. I remember he was on the computer watching a YouTube clip with headphones, and he mumbles under his breath, ‘Ain’t nothin’ wrong with that groove.’ I look, and it was Jason Mraz.”

On album, the Lone Bellow can sound awfully serious—and soulful, too, thanks to the outsized harmonic meld of Williams and vocal partners Kanene Pipkin and Brian Elmquist. “All three of us grew up singing in church,” says Williams. “I grew up in a family with grandparents who’d wander up to pianos, guitars and banjos and sing a ‘hallelujah’ song. At any given moment, someone might break out into humming, ‘Then sings my soul … ’”

You wouldn’t know it by the title, but Walk Into A Storm (Descendant/Sony Masterworks) is the Lone Bellow’s most buoyant album to date. Credit producer Dave Cobb (Chris Stapleton, Sturgill Simpson) with injecting some air into the band’s hearty, gospel-tinged folk sound, loosening the screws a bit while nurturing an exhilarating balance of mood and pacing. Credit Williams and the rest with hammering out the most riveting and concise tunes of their career. “With this one, we really only wanted to have 10 songs, and we wanted to challenge ourselves to say exactly what we wanted to say in those 10 songs,” says Williams.

Pipkin concurs: “The focus was most definitely the songs themselves—how to make them breathe and scream with life and energy.”

The Lone Bellow has some pretty serious responsibilities. One of them is just three months old and cradled in Pipkin’s arms during our interview. Pipkin’s husband, Jason, is the group’s touring bassist. Elmquist has one child, with another on the way, and Williams has four. “Almost a baseball team,” quips Elmquist.

These growing families prompted the band’s move from Brooklyn to Nashville. “We all came to the decision on our own, but it was blatantly obvious,” says Williams. “You can be home more as a touring musician down here—and we couldn’t argue with that.”

Williams and Elmquist share Georgia roots. “It’s where the trailer parks are,” says Williams of his hometown of Acworth, which is about 30 miles north of Atlanta. Elmquist grew up a few hours away in Sandersville.

Williams and Elmquist were both grappling with solo careers when they convened in their Park Slope neighborhood. At Williams’ urging, they were joined by Pipkin, a Fredericksburg, Va., native who was attending culinary school and working as a pastry chef in New York. From the start, the chemistry was obvious, and the trio started landing gigs around NYC, opening for the likes of Brandi Carlisle and the Avett Brothers.

Williams, meanwhile, had crafted a potent batch of songs inspired by the true low point in his life after his wife was thrown from a horse and broke her neck. Though doctors warned that her paralysis might be permanent, she has fully recovered. Friends encouraged Williams to turn his journal entries from that time into music, and those songs formed the foundation of the Lone Bellow’s beautifully angst-ridden self-titled debut.

Months of touring followed, and by 2014, the band was on to its second release, Then Came The Morning, produced by the National’s Aaron Dessner. Almost three years separate that early 2015 release and Walk Into A Storm. The gap between albums has given the group time to reorient itself, both geographically and otherwise, and it was time well spent.

“From album to album, you get to change landscapes—I guess that’s where our heads were at,” says Elmquist. “We usually write about family situations or friendships—these true stories around us. But you also want to explore musically where those songs can go. We were just trying to bring a little bit of levity to the songs.”

“With art, it always seems so natural to pull from heartache,” says Williams. “There are times on this record where we try to challenge that notion. I wouldn’t want anybody to have to look for pain because it’s the only way they can make something they care about.”