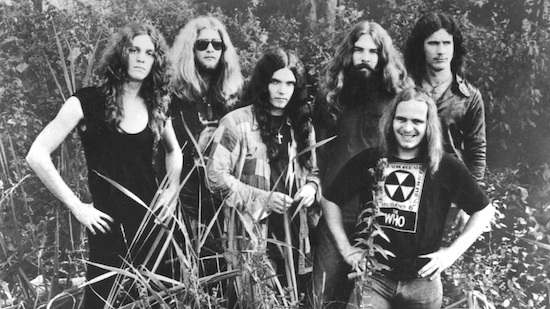 Rigby: Recently, I ran into our local WalMart to buy some copy paper. It was freezing cold outside (upstate New York), and a nice thing about WalMart is you have to walk about a mile through the store to reach the office-supply section, so in frigid winter or blistering summer, there’s some exercise thrown in. As I sprinted past the acre of Valentine’s Day merchandise, I heard a familiar keening: “Freebird” coming through the PA. Have you listened to it lately? Maybe I was missing my husband, who I’ve done many a van journey with. Pre-gig, post-gig, we often listen to the first Lynyrd Skynyrd album. When it gets to “Freebird,” we raise our water bottles toward the windshield: “To Ronnie.” Then we get into the song. Not in an ironic way. It’s too late and we’ve come too far for that. Just a life-affirming, the-road-goes-on-forever kind of way. That’s how I felt as I listened to “Freebird” through the WalMart loudspeakers. I rounded a corner near housewares and almost hugged a man in hunting gear. I just wanted to ask him, “Hey, weren’t they something? Can’t you just picture Allen Collins in red, and Gary Rossington at Knebworth, with Ronnie Van Zandt leading the charge?” Instead I turned around and headed down the storage-tub aisle. I didn’t want a stranger to see me cry.