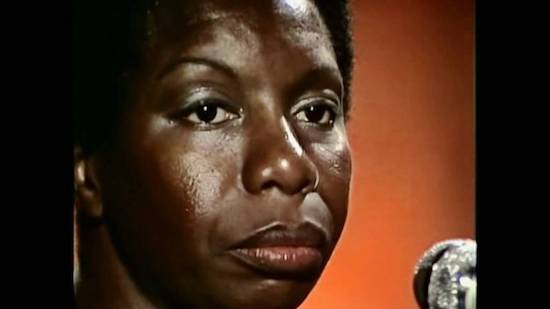 JT: I typed “Little Girl Blue Nina Simone” into the search box on my computer, as I wanted to hear the great singer’s studio rendition of the Rogers And Hart standard. Because, well, I needed a good cry. Every so often, a fella’s gotta let out a good cry or he starts browsing for assault weapons, you know? And “Little Girl Blue,” with its tinkling “Good King Wenceslas” counterpoint combined with Simone’s thick-syrup voice running over the bittersweet hotcake of the song (“Sit there and count your fingers/What else can you do/Old girl you’re through”), does it for me every time. Something in the gravity she lends to the lyrics deepens its meaning till this listener feels like she’s singing about real, existential Hopelessness—a life and death matter—rather than garden-variety loneliness. Her storied, troubled life suggests it’s a subject she knew well.

What I came upon first, though, was a live rendition from Simone’s appearance at the 1976 Montreux Jazz Festival. I’d never heard it, so I thought, “Why not?” and clicked play. It is the first song of the set, so there’s an introduction, and then she strides onto the stage and stands before the piano gazing at the crowd. I don’t think I can rightly describe this gaze, which goes on for an awkwardly long time. It’s like she’s staring them down but without any defensiveness or hostility. “Here I am,” her deadpan countenance seems to say. “This face has been spit on. This face has been beaten. This face is what you did to me, coarse inhabitants of this rocky planet. I am done with you. But I guess I’ll sing you some songs because it is my pleasure to do so.” And, after the first in a series of spacey monologues and battles with her swivel mount microphone, she does just that. But, given the peculiar state of mind she was in that night, Simone does not merely sing the songs as much as perform detailed autopsies, taking them apart, holding up a piece and squeezing some new meaning from them before putting them back in the wrong place, laughing maniacally at her freedom to do so.

A highlight is her lengthy medley of Janis Ian’s “Stars” and Morris Albert’s “Feelings.” The camera holds a tight close-up as she wanders through these otherwise tear-in-your-beer ballads leaving in her wake marble halls of rough beauty the listener can enter into and be cooled by the calm understanding of real sorrow. She matter-of-factly lays her Self bare with each line, rewriting the simple laments into quietly indignant protests against injustices personal and systemic. With genuine astonishment she stops “Feelings” mid chorus to hiss, “I do not believe the conditions that produced a situation that demanded a song like that!” And then goes on to inhabit the tune, shouting, pleading, whispering, nearly breaking down, living it into submission, giving it up, everything, in the most real sense.

Simone makes us feel her loss and “lostness” so directly that it can’t help but strike little hammers in your heart that play a tune called “I have hurt this way, too.” And there is true connection, the kind folks shrink from these days because it’s uncomfortable. I’ve watched that kind of spirit fade away slowly over the years. Maybe that’s why this stuff makes me cry.