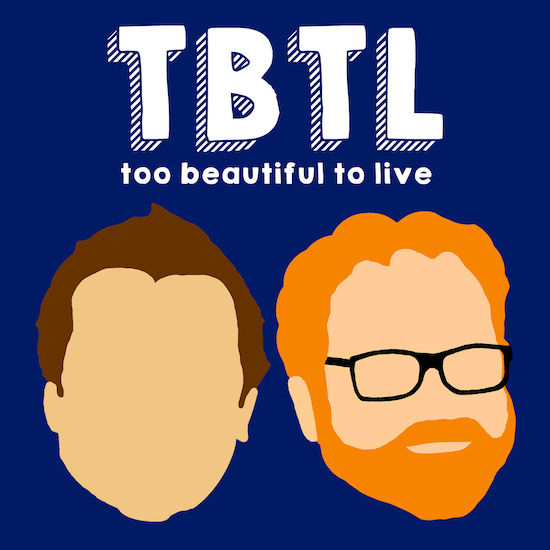 JT: I’ve had a lot of driving jobs because I can’t be around people too much—you know, my antennae are stuck in the “up” position, etc. So in pre-internet/satellite days, radio was a big deal to me. I’d listen to NPR for its general intelligence and lack of commercials, but found the relentless tone of seriousness to be wearying eventually. “I wish,” I’d say to myself, “there was a ‘fun’ version of NPR, where fairly smart people loosened up and talked about whatever: ’80’s pop culture, their favorite taqueria, what the dog did” (i.e., the minutiae of life).

It only took a few decades and the advent of podcasting to find a pretty close approximation to my wish. Too Beautiful To Live, which just celebrated its 10th anniversary, is, indeed, hosted by a veteran of NPR’s Wait, Wait, Don’t Tell Me game show, Luke Burbank, along with his lovably neurotic co-host and fellow talk-radio alumni Andrew Walsh. Like NPR, the podcast is well-recorded and produced, but that’s where the similarity ends. Five days a week, these affable nerds get together and talk for about an hour about their lives in the Pacific Northwest: diet plans, squabbles with neighbors, “sport ball,” playing pull-tabs at the Eagles Club, all interspersed with copious audio drops and tangents that go nowhere. And somehow it all works, very well.

Aside from being naturally funny and quick-witted, Burbank/Walsh’s success is all about tone. They keep things both light and snarky, walking the line between being sort of hip and painfully self-conscious about hipness (and everything really), while remaining the chief target of their own humor. Maybe the most remarkable and endearing trait of TBTL is the genuine good vibes that exist between the hosts even after 2,500 shows together.

Do they get annoying? Oh my, yes. Their oversensitivity to, well, sensitivity and always being seen as PC can eventually be a little tiresome, but that’s probably a generational thing, me being an old codger and all. And a lot of times I just have it on in the background and tune out when the topics are local or uninteresting and catch up later.

Even as ambient entertainment, though, it’s kind of nice to know they are there, yapping away about nothing in particular, a comforting buzz that says you’re among friends, if only the virtual variety.