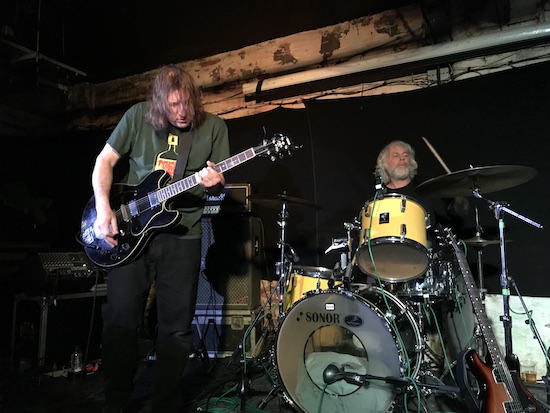 “How frightened are you of chaos?” asked Philip K Dick. “And how happy are you with order?”

Although Dick was defending the incongruous work of fellow science-fiction novelist A. E. van Vogt, the insinuation behind his questions could equally serve as praise for the music of Carlton Melton. What van Vogt did for literature, this instrumental California group does for psychedelic rock, dismantling then reimagining it in a way that unsettles those more comfortable with traditional compositions and familiar tropes.

Supporting the new Mind Minerals (Agitated), the trio’s gigs test the audience’s preconceptions of the function of music and how it should be presented. Tonight, the crowd is treated to a set that follows a waveform. Andy Duvall performs a one-man Chinese firedrill throughout the evening, alternating between playing guitar for avant-garde tunes and drums for more conventional songs.

Set opener “Smoke Drip” is an experimental drone that floats like a discarded cork stopper on a gently rippling pond. “Atmospheric River” seems to transmit snippets of sounds collected from deep-space probes, strung together on a clothesline. “Untimely” recalls the holocaust section of My Bloody Valentine’s “You Made Me Realise” but with more depth and texture. Just by listening, you sense both a mental cleansing and the onset of radiation sickness.

But the evening’s performance is not without familiar signposts to guide the less adventurous. “Psychoticedelicosis” and a cover of Pink Floyd’s “When You’re In” amply satisfy cravings for rock heroics. Guitarist Rich Millman races through a driving, ’70s-metal jam on “Eternal Returns” which then resolves into a touching postscript threaded by Clint Golden’s gentle bass. The charming and buoyant “Basket Full Of Trumpets” could be the Little Drummer Boy gone surfin’.

And thus the show pendulum swings from the cutting-edge to the primordial, from head-feeding to head-banging. So are the men of Carlton Melton highly advanced aliens slumming it through a primitive form of rock or are they cavemen soundtracking the ballet of celestial bodies? That question, as well as Dick’s, can’t be answered without chemical assistance.

Recommended drug pairing: a fistful of shrooms with a Kronenbourg 1664 chaser.