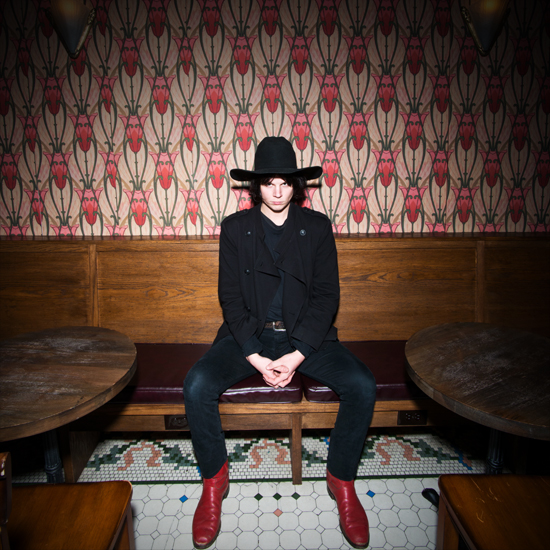 Kyle Craft’s follow-up to Dolls Of Highland, his raucous 2016 debut, could’ve been a political concept album. He’d written “Before The Wall,” a Dylanesque protest song, during the election year and thought about staying with its topical themes.

“There was this point, shortly after that, I was considering writing a concept album, almost this Ziggy Stardust thing about Donald Trump,” says Craft from his recording space in Portland. “I wrote three or four songs, and then I was like, ‘What the fuck am I doing? I’m not doing this.’”

“Ziggy Trump” or “Donny Stardust” might’ve been cool—the orange hair would be apt—but instead, Craft wrote a bang-up album about dangerous women and the reckless men who fall for them. It’s a song cycle full of vitriol and verve, with full-throated and full-throttle Stonesy arrangements. Produced by the Decemberists’ Chris Funk, whom Craft befriended shortly after he took up residence in Portland a few years ago, Full Circle Nightmare (Sub Pop) sounds like a joyful purge.

“It’s mostly about the last four or five years of my life,” says Craft. “For me, it’s kind of a closure album. It’s the end of a long, treacherous, really fun, really wild hallway, and I’m looking back over the hallway and closing the door and walking out. I didn’t want it to try to be pretty. I don’t think I could make pretty music if I tried. Lyrically, sonically, all of it is kind of unhinged.”

Songs blend into one another; the guitar hook on one turns up as a horn part on another; characters recur, the emotions are raw, and the songs rock.

Full Circle Nightmare is Craft’s second LP, but his third full-length release. Last summer on a whim, after finishing Full Circle, Craft and his piano player Kevin Clark recorded about 20 covers of female artists, from Jenny Lewis to Patti Smith to Patsy Cline. Craft shared them with the folks at Sub Pop, and they surprised him by deciding to release some of them as a digital album. (Miley Cyrus’ “Wrecking Ball” didn’t make the cut.) Girl Crazy came out in October, just a month or so after Craft finished them, and four months before Full Circle. The affection Craft shows for songs by Cher, Sharon Van Etten, TLC and Blondie is an antidote to the problematic femmes fatales who populate Full Circle Nightmare.

Craft is looking forward to taking these songs on the road. “On tour, we’re a rock ’n’ roll band through and through,” he says. “If the record is unhinged to anyone, the live show is even more raucous than the record.”

UNDER THE INFLUENCE WITH KYLE CRAFT

The Coast Starlight Train
“I’ve been taking the train from Portland to Seattle almost every single week. It’s really something. All that river and backwoods you never get to see from the 5 and the little charming West Coast nowhere towns … I always bring pen and paper. It’s also great if you like really expensive shots of cheap liquor.”

Moonbase Studios
“The space where my piano player and I combined recording gear for rehearsals and recording. It’s not uncommon for us to be in there from, say, 9 a.m. to 5 a.m., sleep, then repeat. It’s got more beer cans and cigarette butts than mic cables, but it does the trick.”

Dick Stusso
“I’m really excited about this guy. He has a new record on Hardly Art, and the single has some groovy Bolan vibes. His first album, Nashville Dreams/Sings The Blues, is great, too.”