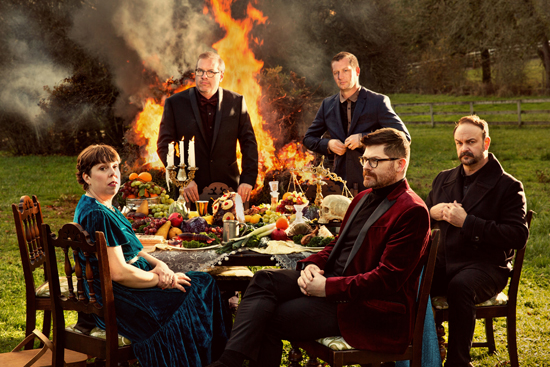 Anyone who’s been cussed out by “Ben Franklin’s Song” knows Colin Meloy still has some poison left in his quill. But there’s a thunderbolt caveat—as catchy as the Decemberists make that Hamilton addendum, the lyrics were penned by Lin-Manuel Miranda. (And oh, what lyrics: “I am Poor Richard’s Almanack-writing Benjamin Fuckin’ Franklin!”)

Poor Colin’s Almanack hasn’t been quite the same since his Crane Wife flapped off. His finest offering since that Capitol-conquering opus, 2011’s The King Is Dead, forwent ornate storytelling and baroque instrumentation in favor of an Americana revolution, a salty hoedown sans frills. When the band did swaddle itself in the gabardine fabrics of olde, you could hear it swallowing its own tail. “June Hymn” is a ventricle-rending tune, but it’s “Red Right Ankle” from a different angle.

I’ll Be Your Girl answers an unposed question: Would you prefer more variations on the same themes, or risky stabs at a new one entirely? The King Is Dead proved the Decemberists’ erudite, radio-play vibe could jibe—even thrive—with unannotated folk/rock. This new LP proves no such definitive thing, except maybe that synthesizer anthems aren’t in this band’s wheelhouse. It’s often fun to hear them go for it, as on the high-contrast drama of “Cutting Stone” and severe lead single “Severed.” (Do stick around through the tonally serrated side two, which is stolen by some exquisitely bonkers backup-singer arrangements.)

What it’s missing is haunting songs—calamity songs, the kind of songs that used to proliferate on Decemberists albums like soot-smudged Victorian orphans. And no amount of Castlevania harpsichord or of Montreal choral carbonation can take their place.