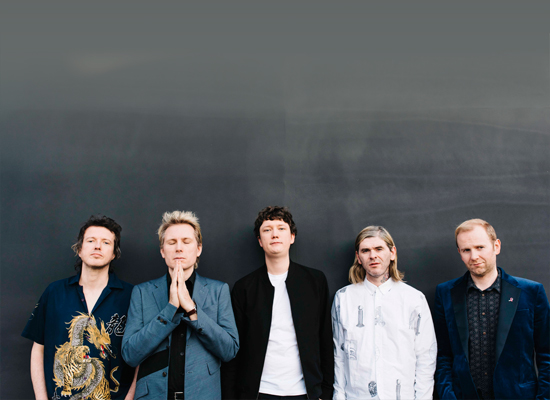 Franz Ferdinand seems to have a thing for laziness. In addition to the Glasgow band’s generally louche persona, there’s a direct thread from “Fabulously Lazy” (a 2005 b-side) to “Lazy Boy” (off its fifth album; not including FF’s 2015 collaboration with Sparks as FFS). “I’m a lazy boy, I’m lazy boy, always be a lazy boy/I’m a lazy boy, yes a lazy boy, lazy in the evening boy/I’m a lazy boy, like you,” sings Alex Kapranos, in the rapid cadence of a playground taunt, and it’s hard not to apply his proclamation to the grating repetitiveness of the lyrics.

“Finally I found my people, found the people who were meant to be found by me, finally, finally, finally I’m here, in my place, oh, I’m here,” he sings on “Finally.” Repetition is a valuable strategy to anchor a chorus, of course, but at some point it becomes intrusive, and on Always Ascending, Franz Ferdinand often crosses that line. Or, the band becomes heavy-handed and didactic, such as on “Huck And Jim”: “We’re going to America/We’re going to tell them about the NHS.” (Although maybe Kapranos and Co.’s work with Sparks has turned them into satirists and the song, which includes something about “drinking 40s with Huck and Jim,” is a misfired joke.)

It’s frustrating, because behind the superficial surfaces, these songs can thrill. “Lazy Boy” even matches a pulsing disco beat to bursts of serrated, spaghetti-Western guitars, and “Feel The Love Go” has a similar disco/rock alchemy, plus a sax solo. The title track kicks in with a familiar Franz Ferdinand thump, and closing ballad “Slow Don’t Kill Me Slow” features some of Kapranos’ best Jarvis Cocker-like crooning.

Always Ascending is a rebooted Franz Ferdinand: Founding guitarist Nick McCarthy (who sang lead on “Fabulously Lazy”) left in 2016 and has been replaced with keyboardist Julian Corrie (Miaoux Miaoux) and guitarist Dino Bardot (1990s, V-Twin). The band sounds energized, even when the words suggest otherwise.