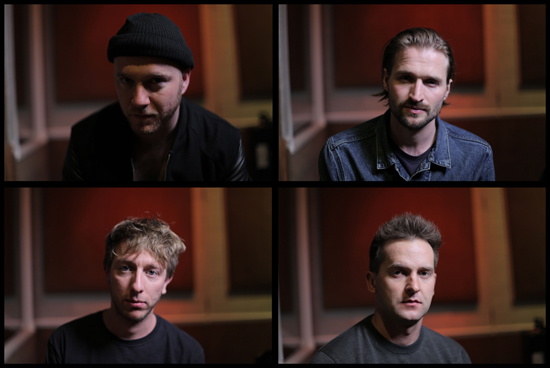 Leaving on a high note was of paramount importance to George Costanza in that hilarious Seinfeld episode where he kept getting out-quipped by everyone at his board meetings. But the concept means even more to Hayden Thorpe, who last year stunned fans by announcing that his British art-rock ensemble Wild Beasts was amicably disbanding after 15 years and five classy albums, just when it was at the top of its game.

The Beasts are doing it in grand style, with a posthumous, catalog-spanning live disc, Last Night All My Dreams Came True (Domino), recorded over a two-day session at London’s RAK Studios. “I’m a big believer in only having a finite amount of anything allotted to you,” says Thorpe, chuckling at the Seinfeld reference. “When you realize you’re getting to the last gleam of this particular allowance, you spend it frugally, or you just make sure that it counts.”

To outsiders, breaking up after your most inventive record—2016’s Boy King—might seem a radical, or at least unusual, career choice. But to Thorpe and his three bandmates (guitarist Ben Little, bassist Tom Fleming and drummer Chris Talbot), it made perfect instinctual sense. Surprisingly, everyone was on the same quit-while-we’re-ahead page. “So there were two meetings,” he says. “One was the day after our Boy King world tour, where there had been an elephant in the room that had slowly inflated to the point of someone finally needing to name that bloody beast.”

But the more serious summit followed at the end of 2016 at a café in the tiny Lake District hamlet of Kendal, where they had grown up together. “I remember finding it quite difficult to speak that morning—I really had to cough the words out because they were sticking in my throat,” says the usually loquacious singer. “As anyone who’s been through a breakup knows, the moment you make that decision and it becomes irreversible, there’s a release of energy that just floods your mind with exhilaration, sadness, the full quota. It was all hung on the collective belief that it was right.”

From its Britpop-defying 2004 debut, Limbo Panto, there was truly no other U.K. outfit quite like Wild Beasts. Little’s moody, evocative textures almost bordered on prog and helped buffet aloft Thorpe’s remarkable voice to typically falsetto heights. (If you liken the group to Peter Gabriel-era Genesis, creatively speaking, you can easily imagine a Gabriel-sophisticated solo career for Thorpe, who vows to keep writing and recording.) So the farewell Last Night document—which features chestnuts like “Hooting And Hollering” alongside more danceable recent cuts “Big Cat” and “Alpha Female”—was the most triumphant high note on which to leave.

“It was just the four of us in a live room,” says Thorpe. “Over the past post-breakup year, we had been playing together just for its own sake, no other obligation, and I think we just got better and better because of that. So we thought it was important to capture this moment, where we were as fluid a creature as we’d ever been.”