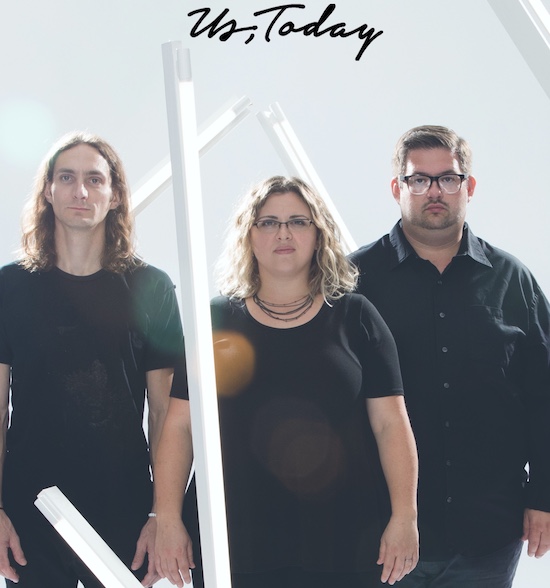 Did you ever wonder what would happen if Us Weekly and USA Today merged? Well, the result would decidedly not be Us, Today, an experimental-leaning instrumental trio from Cincinnati. Vibraphonist Kristen Agee, guitarist Joel Griggs and drummer Jeff Mellot formed eight years after meeting at a coffee shop (how totally 2010) and immediately went to work, releasing three albums: 2011’s RH Sessions, 2012’s Beneath The Floorboards and 2015’s Tenenemies. The LPs were the result of weekly improvisational jam sessions that the band then used as the basis for completed songs.

On new album Computant (out June 15), Us, Today pushes things ever further, adding synths and electronic-drum elements to its sophisticated sonic stew. Perhaps most impressive is that the trio recorded the entire record over the course of one weekend, with most of the tracks only needing three or four takes. New single “Spellcaster (Dr. Spirit),” however, “we did it in one take,” says Agee. “After we did one pass of this song, we all agreed that it was exactly what we wanted—no need to do another pass. The song was done. That is a huge win in my book.”

“‘Spellcaster’ is very different from a lot of other tunes on the album,” says Mellot. “It seems to be more straightforward from a time-signature standpoint, and it relies on relentless energy from the band. This was a tune we felt we needed our attention in the studio. One of our crowning achievements is only doing one take.”

“The middle section was designed to kind of act like being in space after taking off in the first section,” says Griggs. “The guitar and vibes drift lightly before descending into full, rock-out cacophony assault on the senses. We wanted to come back down to drone to end the song like an airplane landing.”

We’re proud to premiere “Spellcaster (Dr. Spirit)” today on magnetmagazine.com. Check it out now, and let these spirit doctors cast their spell on you.