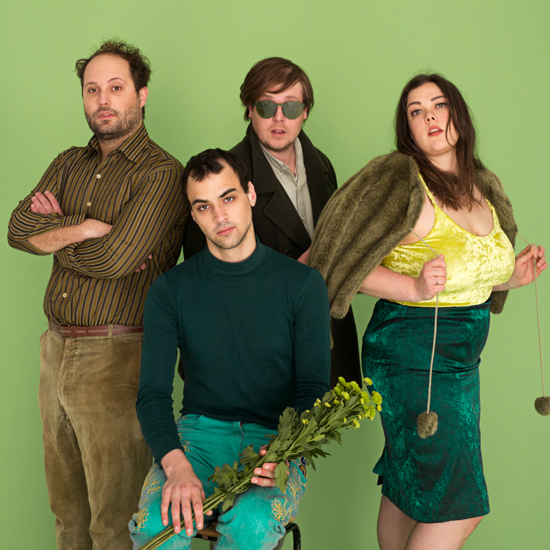 Melbourne’s Totally Mild comes of age with Her

“Her is an album about being a woman—knowing women intimately, relating to them, dating them and feeling isolated from them,” says Elizabeth Mitchell, lead singer, songwriter and bandleader of Melbourne’s Totally Mild. “Many women feature in the songs on Her: me, my mother, my wife, exes and friends. It’s about how being socialized as a woman can teach you to doubt yourself, to take on certain specific roles, and how hard it is for me to leave those learned behaviors behind. My wife says it’s a coming-of-age album, wrestling with the idea that I actually have to be an adult at some point.”

For Her (Chapter Music), Mitchell and band—guitarist Zachary Schneider, bassist Lehmann Smith and drummer Ashley Bundang—set out to make elaborate pop music, utilizing everything producer James Cecil (Architecture In Helsinki) had in the studio. (Bundang has since been replaced by Dylan Young.)

“We played with lots of new sounds from synthesizers and other instruments we didn’t use on the first album,” says Mitchell. “We spent three days altogether doing the basic tracking live, and six months of adding to that. A large chunk of making the record was Zach, James and me spending hours in the studio trying things out and throwing them away.”

The songs on the quartet’s sophomore album explore unruly emotions with Mitchell’s ardent vocals supported by the band’s nuanced work. “Pearl” describes the subtle passion of true love with shimmering chords, glistening slide-guitar textures and a steady backbeat, while “Today Tonight” rides a subtle reggae-like pulse to express the longing for a lover who will never return.

“The songs are autobiographical, but not all of them are sad,” says Mitchell. “I just have a way of making things that are happy sound sad. Maybe it’s that duality of being objectively happy and chronically depressed.”

UNDER THE INFLUENCE WITH ELIZABETH MITCHELL

Aldous Harding
“I am completely obsessed with Party, the record she put out last year. It’s such a strange and emotionally impactful album. I saw her play at Meredith Music Festival in December. What a force!”

Walking Around
“My car exploded. I drove it from Melbourne to Queensland, and it gave up. That’s influencing my experience of the Melbourne summer. It’s really hot, and I have to walk everywhere. It’s nice to listen to more music on my headphones, I guess.”