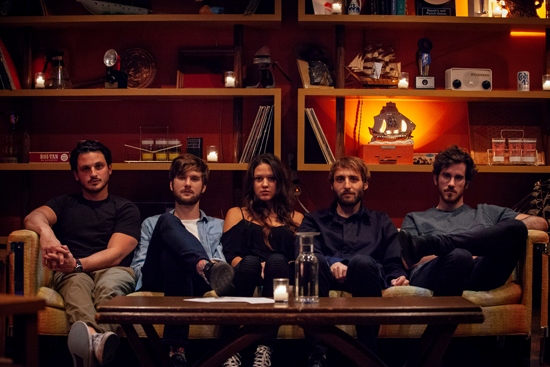 If the internet hadn’t upended the music industry 18 years ago, it’s hard to say whether Mt. Joy would be in the position it’s in now. “These dreams are more than paper things,” muses Matt Quinn on “Astrovan,” a groovy, blues-tinged standout from the Los Angeles-by-way-of-Philly band’s self-titled Dualtone debut.

It wasn’t anything as tangible as paper that figured into the group’s unlikely ascent from obscurity to the festival circuit. That fame came by way of Spotify, when “Astrovan”—with the help of its Deadhead Jesus protagonist—accumulated no less than five million streams with zero promotion. “I just thought it would be fun to have a song on Spotify to show my friends and family,” says co-founding guitarist Sam Cooper. “Then it just took off and had, like, a million plays in the first month.”

“We chose an Astrovan for the lyric because it’s just a funny car,” says Quinn. “But it speaks to a certain level of socioeconomic class, in some respects. I think people are grabbed by the contrast of Jesus and the Astrovan. Then, when they dive in, they connect with the story within the song, as well.”

For a while there, Quinn and Cooper were living out that story within the song—of being fitfully content with just scraping by. Quinn was going to law school and punching numbers for a company that handled music-download royalties; Cooper was pursuing ad-agency work. “We weren’t thinking of music as a career,” says Cooper. “But things changed pretty quickly.”

With “Astrovan” lighting up Spotify, the phone calls from labels started coming in, and Mt. Joy was compelled to find management and fill out its lineup. They landed multi-instrumentalist Michael Byrnes through Craigslist and added Sotiris Eliopoulos on drums and Jackie Miclau on keys a short time later. The band settled on the well-respected Dualtone imprint, home to a fairly diverse roster, from the Lumineers and Delta Spirit to Shakey Graves and Robert Earl Keen. Foregoing a big-name producer, they chose Jon Gilbert, known mostly for his live sound work at major festivals like Coachella and Bonnaroo. “We recorded it over nine or 10 months last year at his home studio in Pasadena,” says Cooper. “He was amazing—he’s a genius with different sounds.”

Along those lines, Gilbert has done an exceptional job of corralling Mt. Joy’s various influences and points of reference, from Traffic, the Grateful Dead and Talking Heads to more recent acts like Dr. Dog, the Revivalists and My Morning Jacket. He also succeeded in not sucking the life out of the performances, applying a grainy indie-soul finish to the whole thing. “In terms of the album’s sound, we were thinking Alabama Shakes and Michael Kiwanuka,” says Cooper.

Thanks to the streaming gods, Cooper and Quinn now find themselves in the enviable position of returning home as conquering heroes—or something along those lines. “I’ve basically been living out of a bag since I got to L.A.,” Quinn says. “Philly still feels like home.”

“We’re still living there in our minds,” says Cooper.