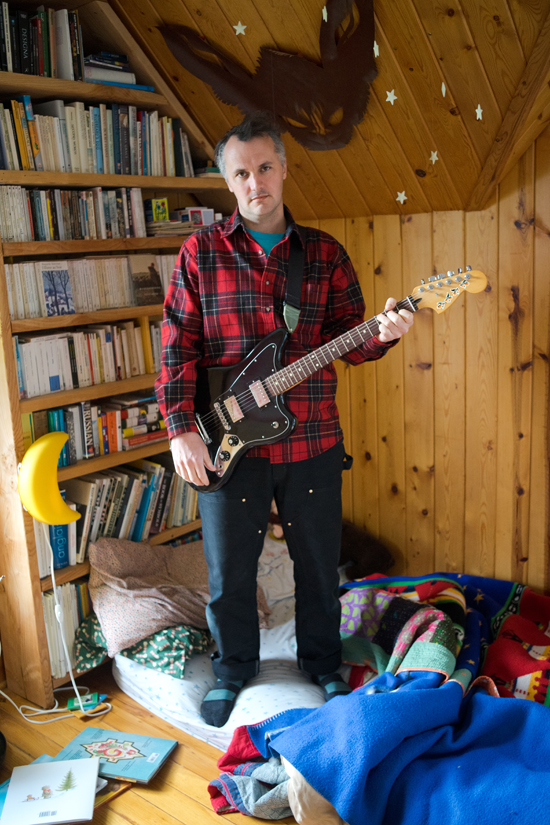 With Now Only, Mount Eerie’s Phil Elverum is turning loss into art again

From 1996 to 2003, Philip Whitman Elvrum recorded as the Microphones. Then he rebranded himself as Mount Eerie. And as Phil Elverum. And now …

“I’m a single parent of a three-year-old—that defines me,” says Elverum. “Right now, she’s at school, and I pick her up in an hour. When she’s home, she doesn’t let me talk on the phone for very long before she starts yelling at me.”

Although he has a new album to talk about, he has only small windows of his day available. After the death of his wife, artist Geneviève Castrée, as a result of pancreatic cancer in July 2016, Elverum had to redefine himself again. Last year’s stark A Crow Looked At Me documented, in unflinching detail, his attempt to process the unfathomable event. And now comes Now Only (P.W. Elverum & Sun), which extends Elverum’s self-examination, both in continuing to talk through the loss of his wife and in articulating his conflicted views about turning his intensely private experiences and thoughts into songs and performing them in public.

“I don’t know how I’ve been able to make two albums during this life,” says Elverum. “That explains why the two albums I’ve made are so spare in their production. I made them in this room upstairs in times like this when she goes to someone else’s house for a couple hours or after she goes to bed.”

A Crow Looked At Me and Now Only aren’t radically different in tone from the quieter end of the spectrum of Elverum’s Mount Eerie work, but they are unprecedented in their explicit autobiographical subject matter. “Although I think of all of my work as part of the same flow, there’s definitely this dividing line in my life now, between pre-Geneviève dying and post-Geneviève dying, and the creative work also obeys that boundary,” he says. “I’m not going to play any work from before that. I feel like that person is gone, that version of me is gone.”

As on A Crow, Elverum directly addresses his wife in most of the tracks on Now Only. “I recorded all these songs about the echoes in our house now/ And then walked out the door to play them on a stage/But I sing to you,” Elverum sings on opener “Tintin In Tibet.” He’s aware of the artifice and layers of irony embedded in that statement, though.

“That’s one of the themes that runs through both of these records: the absurdity of doing these extremely private things on a stage and being looked at while I’m doing it, and knowing that I’m doing it, but pretending that it’s not public,” says Elverum. “It’s the interplay between public and private. That’s one of the things I poke at in the songs.”

In conversation he’s thoughtful and analytical, but also cheerful and quick to laugh, even when discussing the weighty subject matter that his songs tackle. “Even within these super-heavy, sincere songs, there’s irony and satire,” he says. “Even on the very beginning (of A Crow), where ‘Death’s not for singing about, it’s not for making into art’: There’s contradiction and irony, and there’s playing with the form. I can’t help it. Even when I’m trying to be honest, I can’t help joking around.”

Elverum sees Now Only as “part two” of A Crow. It extends and deepens the exploration of loss and grief, but it also includes self-referential examinations of his experience touring the album. The title track recounts, in part, his experience going to a music festival in Phoenix “to sing these death songs to a bunch of young people on drugs.” On “Two Paintings By Nikolai Astrup” and “Distortion,” he’s thinking about legacies and what’s left behind after death. At around 10 minutes each, those songs are longer than anything on A Crow.

“I had more to say, and I still feel they’re short,” he says. “I’m interested in saying something that’s full of content, rich and potent. With A Crow Looked At Me, I feel it had depth, but a lot of it was just the initial impact feeling, like a blunt blow. There’s a place for that, but I’m interested in having a more nuanced conversation. That’s what these longform songs can do. It’s not for everyone. It’s probably not going to be that popular. People don’t like to sit around and talk for 45 minutes about mortality. But I do.”

Elverum knows that these albums can challenge listeners: They demand attention, and the experience isn’t a comfortable one. While Now Only has a few moments of noise and volume, its aesthetics are still as stark as its lyrics.

“I don’t think of them as songs,” says Elverum. “I know that’s what they are, but I think of them more as me writing about these big issues, about what’s on my mind and in my life. This is what my life is like now. It’s interesting and emotional and painful, and there’s beauty and joy and residual love. They’re barely musical, like the last record. They’re in the shape of a song, but they’re huge piles of words and ideas that hang on rhythm and vague melodies.”

Being a single parent dominates Elverum’s life, and he doesn’t plan to tour much, but part of him continually focuses on turning his ideas into art. “Whatever I’m doing, I’m always chewing on these ideas and working on them,” he says. “I don’t know what’s going to come next, but I can vaguely make out the shapes of one more very wordy record. So maybe there will be a part three. Then, hopefully, I’ll find something new to do.”