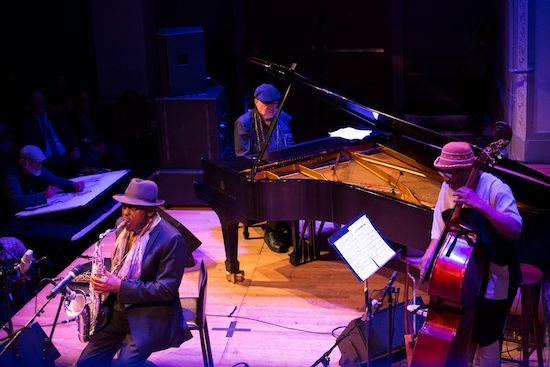 This week, MAGNET’s Mitch Myers reports from the Vision Festival, the avant-garde jazz event in Brooklyn; photo by Eva Kapanadze

Welcome to Brooklyn and Vision Festival 23, where once again people come from all over the world for a week devoted to free and improvised music. This dedicated audience will keep coming back all week long, attending night after night of spirited, left-of-the-dial jazz, dance and poetry expressed in a most spiritual fashion.

Despite having moved from Judson Memorial Church in NYC to the Roulette Intermedium in Brooklyn, the Vision thing still feels the same as ever once the music starts. That is, free-flowing improvisational music played by a variety of outsider musicians coming from several different generations and diverse creative backgrounds.

This year’s festivities honored the artistic lifetime of pianist Dave Burrell, and the opening night featured Burrell playing in a several group contexts. He was part of the free-jazz revolution of the ’60s and worked with iconic fire-breathers like Marion Brown and Pharoah Sanders, as well enjoying a longstanding association with saxophonist Archie Shepp. Supported by improvisational stalwarts including bassist William Parker, percussionist Hamid Drake and drummer Andrew Cyrille, Burrell’s amorphous piano work blended well with the various combinations of players, and he methodically energized the room regardless of the band’s lineup.

After the festival’s opening invocation featuring Parker, Drake and dancer/poetess/Vision Fest founder Patricia Nicholson, Burrell got down to business with his Harlem Renaissance ensemble featuring altoist Darius Jones, trombonist Steve Swell, bassist Harrison Bankhead and drummer Andrew Cyrille. Pioneers of fire music like Burrell and Cyrille always play with passion, but we’re now sadly witnessing the dying embers of an avant-garde movement that began more than half a century ago. Cyrille (a veteran sideman of the late, great Cecil Taylor) played a military-styled drum solo that brought everyone to attention, while Swell and Jones gamely improvised as hoped.

Next up was the Archie Shepp Quartet with Burrell, Parker and Drake. Burrell had played with Shepp for many important years and recorded more than a dozen albums as part of Shepp’s working groups in the ’60s and ’70s. On this night, they played compositions from vintage albums like Kwanza and Attica Blues. While Shepp’s embouchure was intact and his throaty tenor wail still present, his music lacked the urgency that it contained in previous decades. One obvious highlight was his smoky rendition of vintage Ellington ballad “In A Sentimental Mood.”

After a brief-yet-dynamic performance by bassist Shyna Dulberger and dancer Djassa DaCosta Johnson (a.k.a. Warrior Of Light), the Dave Burrell Quintet took the stage for a final set of totally free playing, this time featuring Parker, Cyrille, New Orleans tenor saxophone legend Kidd Jordan and tenor saxophone up-and-comer James Brandon Lewis. Jordan has been quite ill this last year and hasn’t played many gigs recently. As weak as he may have appeared, Jordan played with a burning intensity and emitted a plaintive wail expressing both his pain and his courage, often leaning on the piano or sitting down between his fiery solos.

With Jordan and Shepp now in their 80s and Burrell right behind them at 77, we’re witnessing the slow exit of the old guard. Thanks to the Vision Fest, that exit is expressed in a dignified and respectful way, paying earnest tribute to their often-neglected jazz elders.