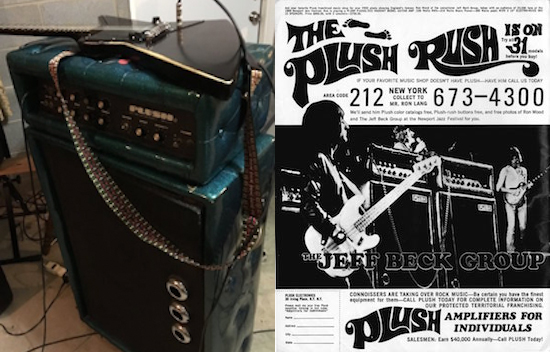 Holsapple: The iconic Kustom amps of the 1960s and 1970s are not the only rigs with tuck-and-roll naugahyde covers. Plush Amplifiers combined the best technology of Fender’s pre-CBS amplifiers with Kustom’s bright and squishy look, and even now, they’re among the best sounding amps I’ve ever played through.

I own a midnight-blue Plush P1000S that I had 12-inch speakers installed to replace the factory 15-inch oness, making it more adaptable as a guitar amp. Ultimately, it’s a twin reverb; the gentleman who sold it to me was afraid I was going to cannibalize the Plush for its transformer and other parts. I assured him that I’d been waiting to own one since I was old enough to know the Jeff Beck Group used ‘em on their U.S. tour. With their Buick-like portholes, Plush amps are still reasonably priced for vintage amps, and their sound is strong and pure, just how I like it! And pretty, too!