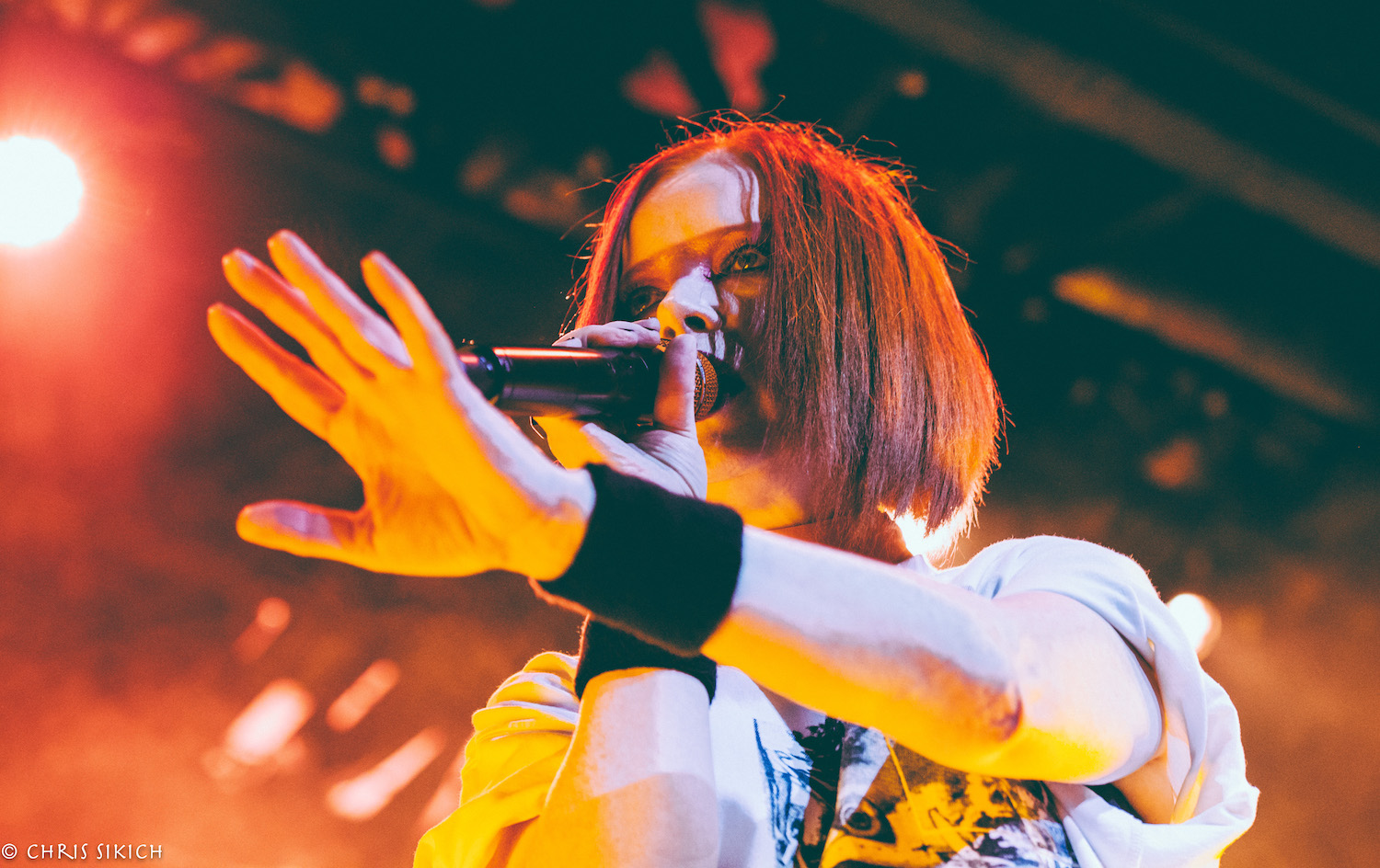 Garbage celebrated the two-decade anniversary of Version 2.0 with the 20 Years Paranoid Tour, recycling old faves in new ways. At the Fillmore in Philly, MAGNET’s M.J. Fine (words) and Chris Sikich (photos) were happy to take in the trash.

Twelve seconds into Version 2.0, Shirley Manson shows her cards. “I’ll tell you something,” she purrs. “I am a wolf but/I like to wear sheeps’ clothing.” 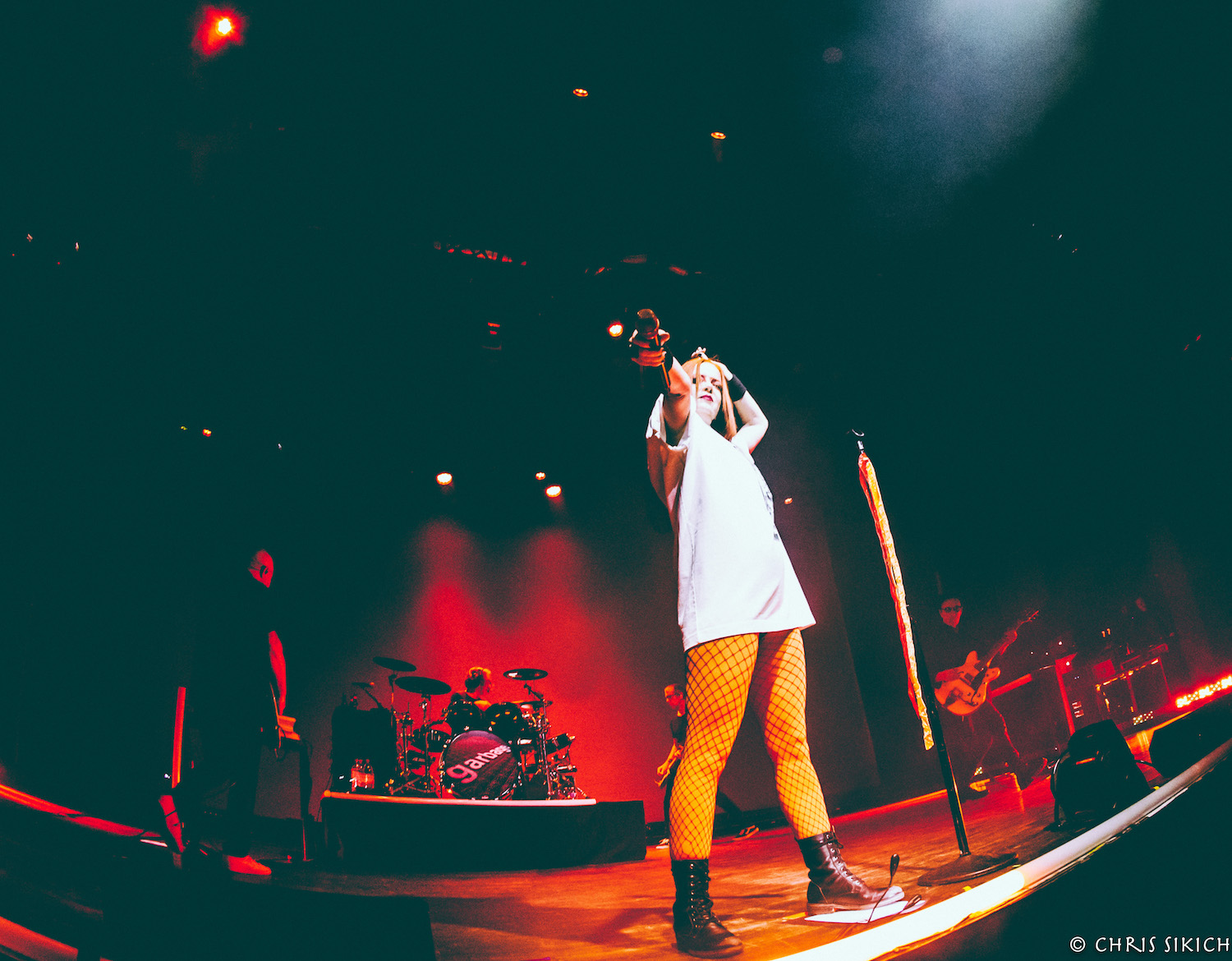 And so it is that “Temptation Waits,” the first track on the Garbage’s second album, sets the tone for the rest of the experience. It’s all about the switch and bait. Think you’re getting a second album that’s merely an upgrade of the band’s first outing? Nope. When Version 2.0 came out in 1998, it was both noisier and more self-consciously poppy than Garbage’s 1995 self-titled debut, with more techno beats, more distorted guitars and brash lyrical nods to the Beach Boys, Pretenders and Salt-N-Pepa.

And so it is with “Temptation Waits,” the third song played each night on the 20 Years Paranoid Tour. Think you’re getting a live redo of a beloved record? Think again. 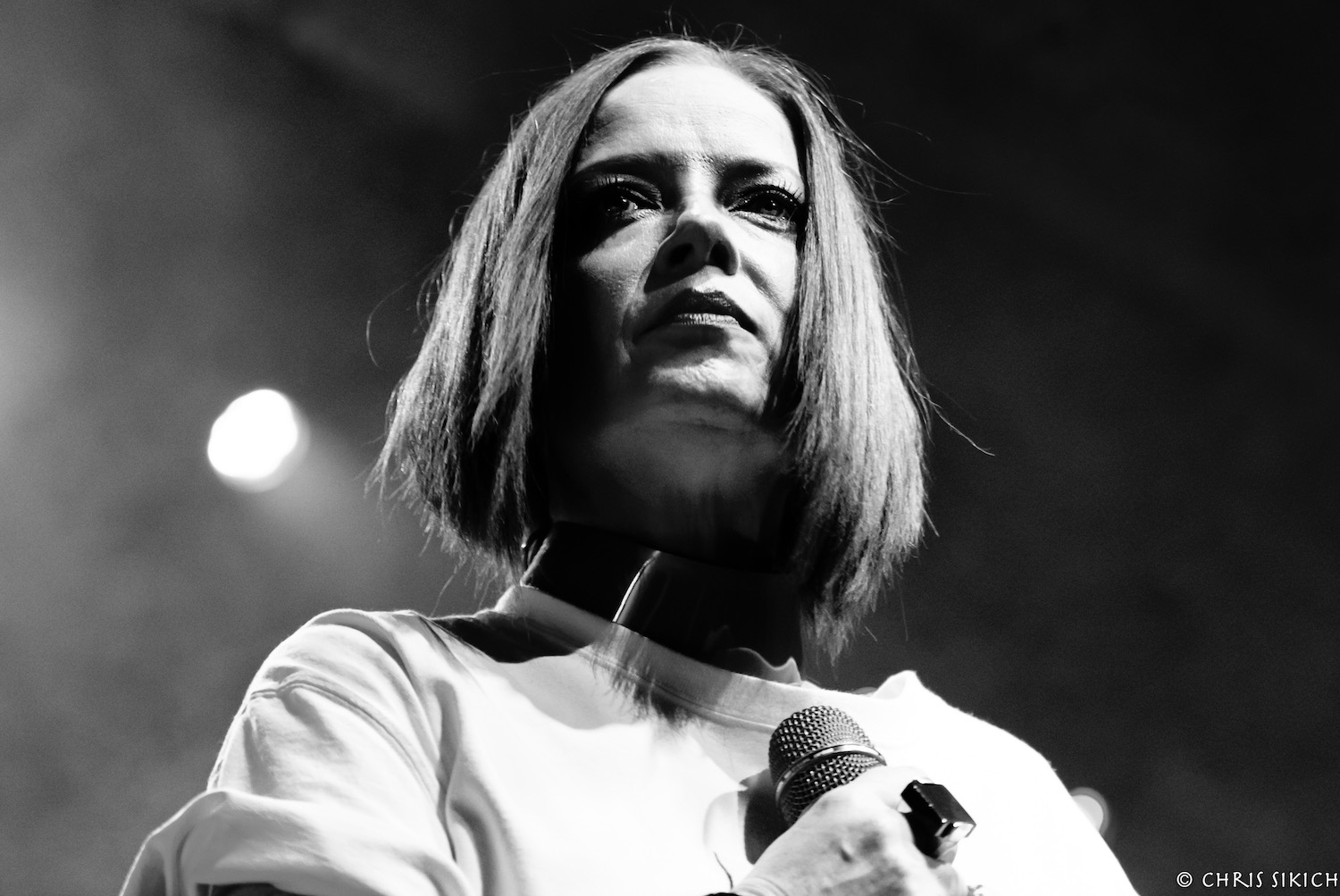 That much was clear from the setlist, which remained constant throughout the 39-date tour, with minor variations reserved for the encore. With a running order that completely disregarded the flow so familiar to listeners who’ve lived with Version 2.0 for two decades, the sonics were spot-on, from the pointed dialogue from films (including 2001: A Space Odyssey, Natural Born Killers and The Graduate) that played between songs to arrangements with snippets of other songs baked in. (“Wicked Ways” borrowed Depeche Mode’s “Personal Jesus” rather effectively; “You Look So Fine” paid proper homage to Fleetwood Mac with a bit of “Dreams.”)

Rather than simply re-create the record song-for-song with older musicians employing newer technology, Manson and the band—original members Butch Vig, Steve Marker and Duke Erikson, joined by ringer Eric Avery of Jane’s Addiction on bass—challenged themselves, delighted the diehards and shrugged off any fair-weather fans with a show that was as much about rewriting history as it was a well-earned attempt to cash in on Gen-X nostalgia. 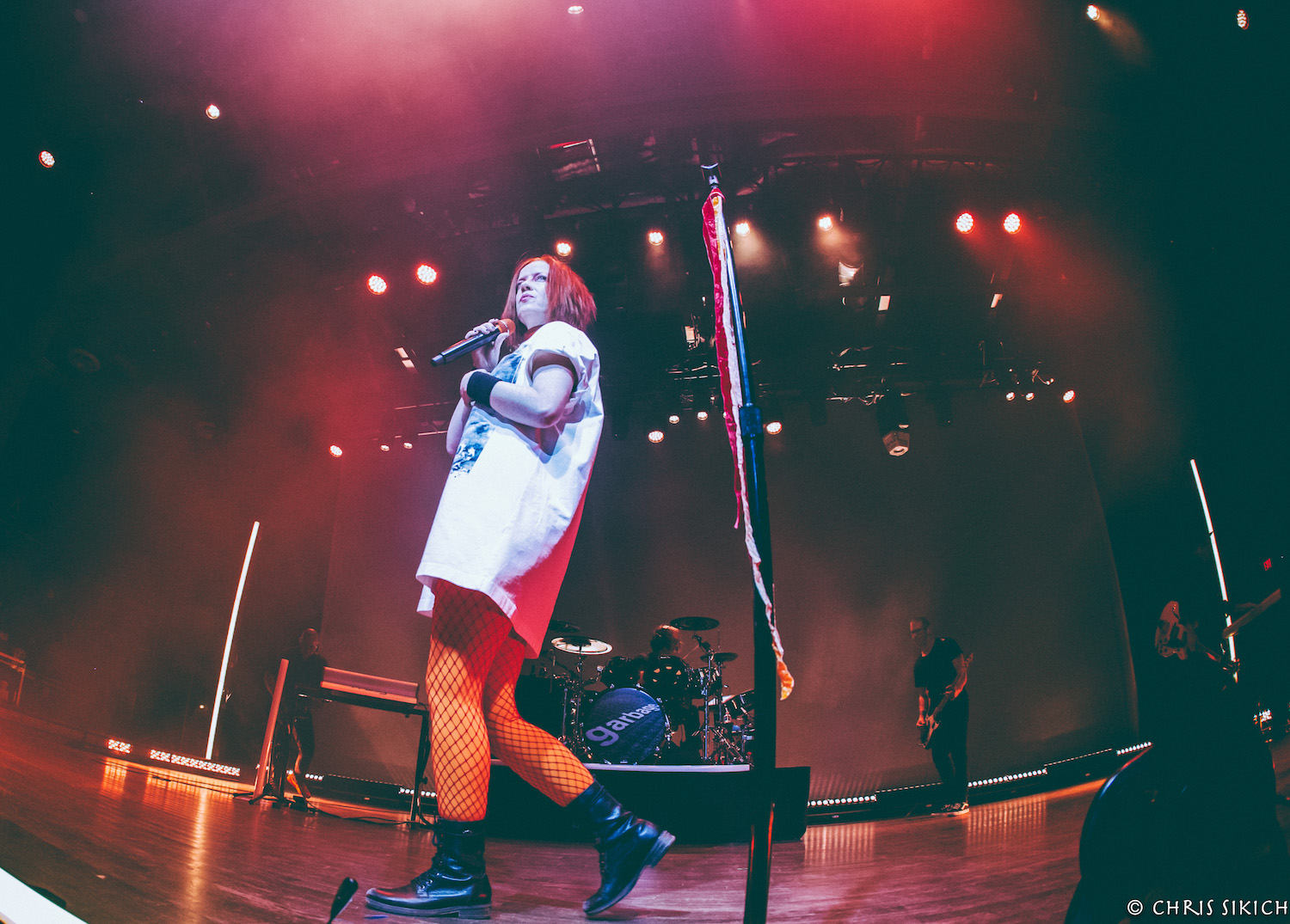 At the Fillmore in Philadelphia, with just two more U.S. dates and a four-night run in Mexico left on the tour, hits like “I Think I’m Paranoid,” “Push It” and “Special” sounded appropriately massive, and deep cuts like “Dumb” and “Hammering In My Head” were explosive. Yet the band seemed most energized by songs that didn’t quite make the album, several of which had never been performed live before this year.

The eight b-sides scattered throughout the set proved that Garbage’s late-’90s castoffs have longer legs than chart-toppers by long-forgotten peers; two of them, “Afterglow” and “Deadwood,” got things off to a strong start even before “Temptation Waits” provided the first of many sing-along opportunities. The show’s one stumble was a reading of “The World Is Not Enough,” the band’s 1999 Bond theme, that felt listless and out of place. 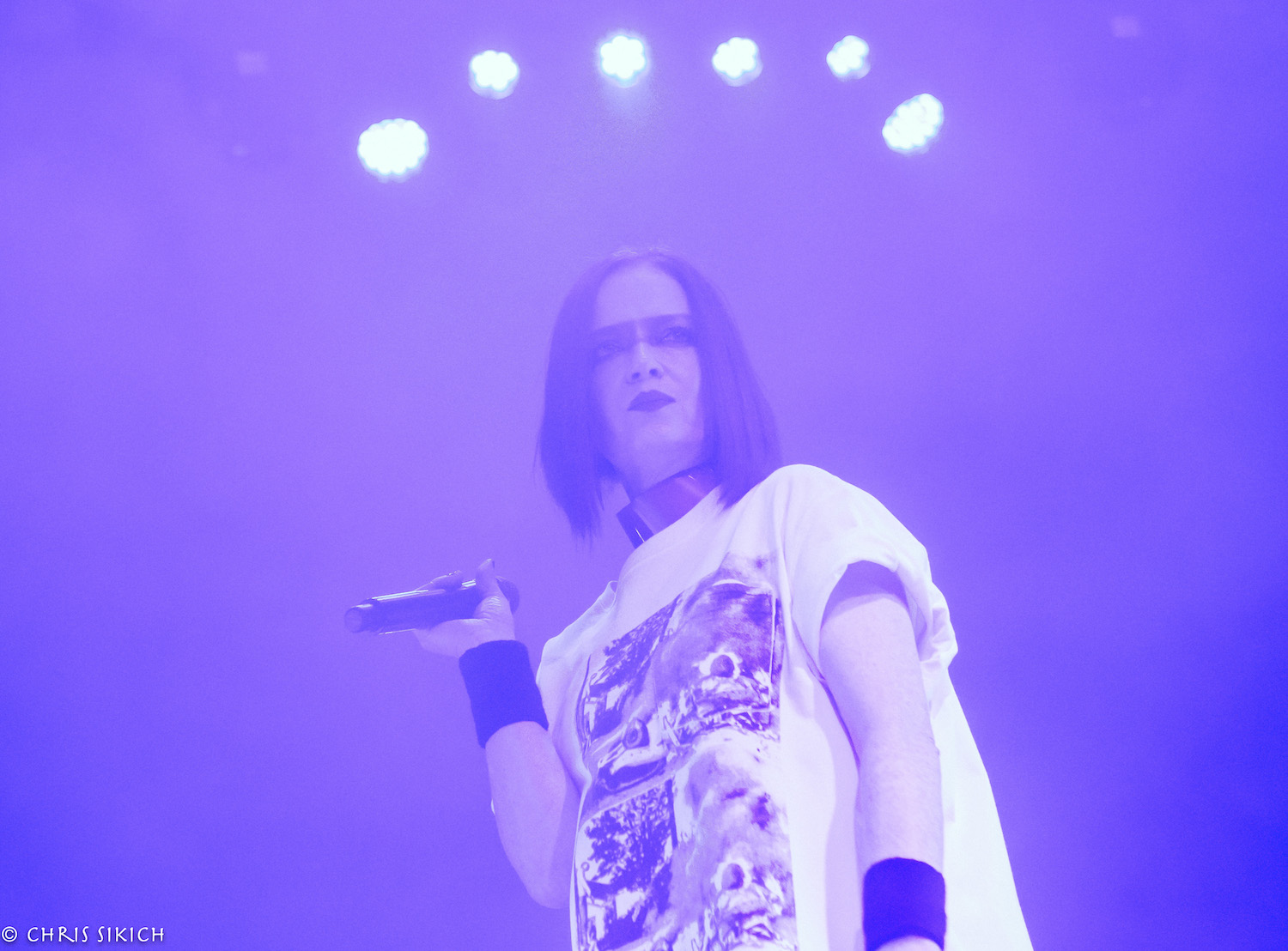 While the main set played out with machine precision on paper, a function of the instrumentalists’ engineering backgrounds, Manson was charmingly loose-lipped between songs. Warning the audience early on that anyone who’d rather just hear the music without her commentary should just go home and put the record on instead, she kept it up all night, shedding light on the heavy subjects that pervade the album and repeatedly alluding to the U.S.’s current political situation. Reminiscing about her first time in Philadelphia, she recalled playing the “Theatre Of Arts” (mistake number one) with her previous band Angelfish on a bill with Live and Vic Chesnutt, eating a “Philly sub” (mistake number three) and nearly kissing Live’s guitar tech here (which would have been the biggest mistake of all). 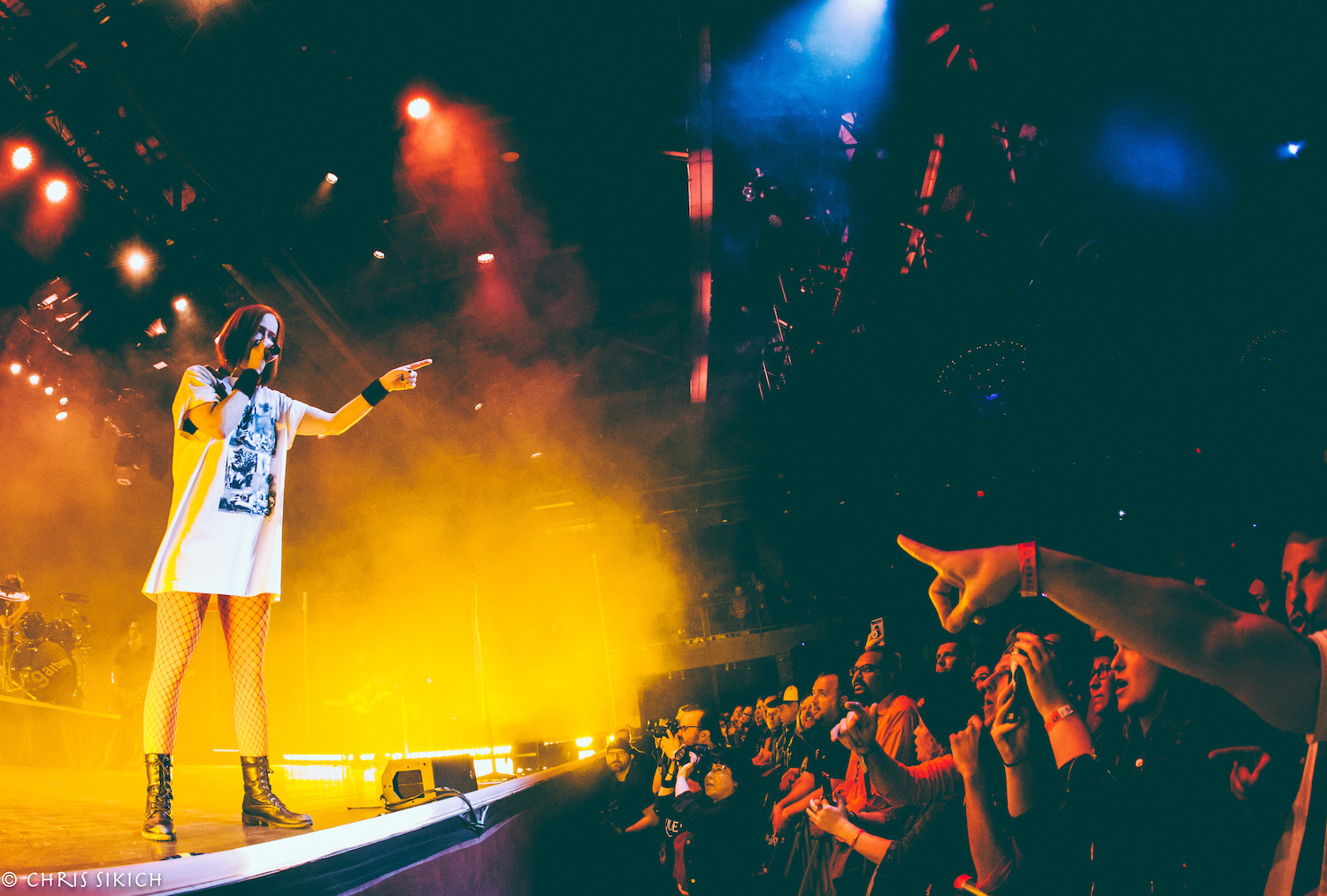 But it was the encore that was most gloriously unscripted. Manson took a more direct swing at the White House, a move that felt earned after she spoke of the beginning of her lifelong admiration for America as a girl growing up in Edinburgh and her outsider status in an otherwise all-American band: “Fucking knock it off with the dictatorship here. You have something spectacular here and you are watching it be dismantled.” Erickson put it more simply: “I have one word: Vote.”

After a deeply moving performance of “The Trick Is to Keep Breathing,” which Manson called Version 2.0’s linchpin, the singer surprised her bandmates by quashing the one new song they’d been playing in favor of requests. After Marker rejected a plea from the crowd for “Parade,” from 2001’s Beautiful Garbage, Manson indulged the fan with an a cappella bit of it, and then the group debated among themselves whether they were prepared to play “Queer” for the first time in more than a year. Once Vig located the instantly recognizable sample, they pulled off a version that was as flawless as anything that had come before. Dedicating the last song, Beautiful Garbage’s “Cherry Lips (Go Baby Go!)”—another genderqueer hit—the band pulled off the biggest switch of all: making a show without a single offering from the past 16 years sound absolutely of the moment, by the moment, and for the moment.

In what could have been a thankless warm-up slot, Rituals Of Mine cultivated a chilly mood of menace and magic out of spare synths, Adam Pierce’s laser-focused drums and singer Terra Lopez’s impressive lung power.