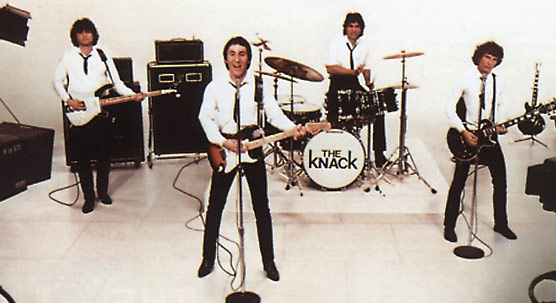 Growing up an hour east of Los Angeles, I was too young and protected to witness the city’s early-‘80s power-pop explosion at close range. But in my secondhand way, I was weaned on the scene. Most Sundays, while my mother and grandmother worried over the family’s lunch, I was in the living room poring over the club listings in the Los Angeles Times. In those days, the Times gave local music generous coverage, but the ads were even better, listing shows at now-vanished clubs like the Starwood and Madame Wong’s (a converted Chinese restaurant) and still-extant ones like the Roxy and the Whisky A Go-Go. The Whisky had the best, most mod-looking ads: alternating stripes of black-on-white and white-on-black, announcing a parade of bands—the Unknowns, Real Impossibles, Gary Myrick & The Figures—that I romanticized like mad.

Los Angeles had one other big thing going for it: KROQ. Long before becoming a template for alt-rock stations nationwide, KROQ was an independent oasis in a town dominated by dinosaur rock. Glam scenester Rodney Bingenheimer spun rare imports and drooled over girl groups on weekend nights; the rest of the week, the station made concise, exciting songs like the Kingbees’ rockabilly-tinged “The Big Rock” and Great Buildings’ soaring “And The Light Goes On” into regional hits, alongside an Anglophilic diet of Joe Jackson and the Police. Early on, of course, came “My Sharona” by the Knack (pictured), which was to Los Angeles in 1981 what “Smells Like Teen Spirit” was to Seattle a decade later.

What’s noteworthy is how closely this music co-existed with other local trends. Power pop was the radio-friendly lodestar of a constellation that spanned glorified bar rock (Naughty Sweeties) and arty outsiders (Suburban Lawns), with the so-called Paisley Underground (Dream Syndicate, Rain Parade, Salvation Army) just beginning to be noticed. I’m sure I’ve idealized the amount of infighting there must’ve been, but from my vantage point in Upland, it looked pretty idyllic.

This isn’t the chapter of Los Angeles rock history that people mythologize, but it’s never been forgotten here. Major players like 20/20 and the Plimsouls have mounted the odd reunion, while the Poptopia and International Pop Overthrow festivals bring together the city’s new-wave-inflected style and more ‘60s-centric variants. If Weezer didn’t learn something from these bands then I never walked down Melrose Avenue in a sharkskin sportcoat.