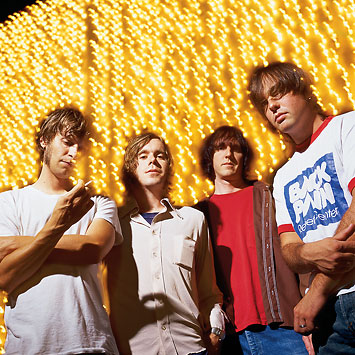 Most bands rightfully despise comparisons to other ones. But when it came time to make their third album, Walking In A Straight Line (Yep Roc), Chapel Hill’s Mayflies USA found a specific make and model to emulate: the Stones’ Exile On Main Street.

“They made it with a mobile unit and had a siege mentality about it,” says bassist/vocalist Adam Price.

“We’re sort of aiming high by saying that,” says guitarist/vocalist Matt McMichaels with a laugh. “But it sounds like they would have made the record even if no one had put it out. And it sounds like they were on top of each other at the time they recorded it. You can actually hear the proximity of people to each other.”

During the recording of Walking In A Straight Line in Chicago earlier this year, the Mayflies were able to learn something about proximity and personal space; Price, McMichaels, guitarist/vocalist Matt Long and drummer David Liesegang all lived in a single room.

“It gives you sort of that circling-the-wagons kind of mentality,” says Price, who also admits the Windy City winter had a very audible effect on the album. “It sounds kinda silly, but it was too cold to go out and get drunk every night. When we’re left to our own devices, we’re definitely capable of shooting ourselves in the foot. [The cold weather] really helped us to stay focused on making the record.”

On the heels of 1999’s Summertown and 2000’s The Pity List, the Mayflies sought to shake things up a bit with Straight Line by bringing in producer Keith Cleversley, who’s worked with the Flaming Lips, Mercury Rev and Spiritualized. According to Price, Cleversley leavened the band’s “default mood of self-deprecating fatalism.” Straight Line is anything but fatalistic. “Can’t Stop Watching” has a twitchy formality not far removed from the Strokes. Closer “Sweet 16,” with its dreamy vocals and low, underwater guitars, is sweetly menacing. At its base, though, there’s still a lot of pop power. “The Greatest Thing” is optimistic and predictably tuneful, “So Young” has twinkly guitars and “123” is pure Teenage Fanclub circa 1991. Despite songwriting that leans in a power-pop direction, the band feels uneasy about the label.

When it’s suggested the definition of power pop has expanded, making it a less limiting form, Big Star comes up.

“That’s the alchemy,” says McMichaels. “That’s the band that did it right. If Big Star is power pop, then hell yeah, so are we.”