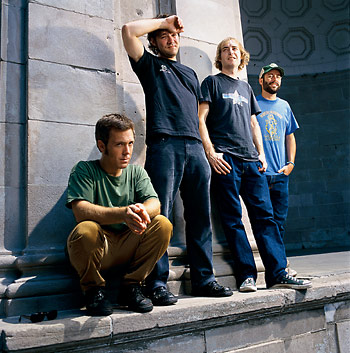 When you kick off an album with a flurry of Tommy-era Pete Townshend windmill guitar chords, it’s like opening a jar of strawberry jam at a picnic table. You’re bound to attract wasps. Arlo’s rocking new pop longplayer, Stab The Unstoppable Hero (Sub Pop), would’ve kept the record-shop staff in the film High Fidelity busy arguing over influences that run the gamut from Creedence Clearwater to the Knack, from Nilsson to Nirvana. The Los Angeles group—guitarists Nate Greely and Sean Spillane, bassist Ryan Maynes and drummer Tom Sanford (all four sing)—are fully aware they’re an attractive nuisance for record-collecting geeks. They, too, are record-collecting geeks.

“It’s a disease,” says Greely, admitting he’s “stuck on classic rock. I spend as much money on records as a junkie would on heroin.” The only way to feed his addiction, he says, was to spend thumb-numbing hours sifting through dusty cartons of vinyl at garage sales and record stores. Greely was convinced his stash of 500 albums was hot stuff until he ran into a die-hard collector recently. “We played with this older guy in Buffalo,” he says, “this pack rat whose house was cluttered with accordions and strange instruments—thousands of records and CDs everywhere. And I’m like, ‘Oh no, this is where I’m headed.’”

Comparing Arlo’s live shows to “being on a mission,” Greely—who’s weaned himself from a serious Pavement, Pixies and Sonic Youth habit—is fully aware he’s paddling against current trends. “The music industry is based on chasing the last big thing, so they’re usually five minutes late,” he says. “When I start the day it’s like a stopped clock. If the popular scene catches up to me, that’s fine.”

Maynes—usually a Beatles superfan—was inspired to co-write Unstoppable’s songs by his devotion to the Move and ELO. “Roy Wood and Jeff Lynne were my other Lennon and McCartney,” he says.

Like the guy who finally stopped after years of hitting himself with a hammer, Greely seems vaguely uncomfortable with Arlo’s recent road success.

“One night the place is packed and everybody knows your songs,” he says. “Then you’re in Nebraska playing for five people that don’t give a fuck. Actually, those nights are easier for me to deal with. It still seems bizarre when people like it. When nobody cared, I convinced myself that I was a genius, that anything popular sucked. Getting popular might fuck with my worldview. Would that mean we sucked, too?”