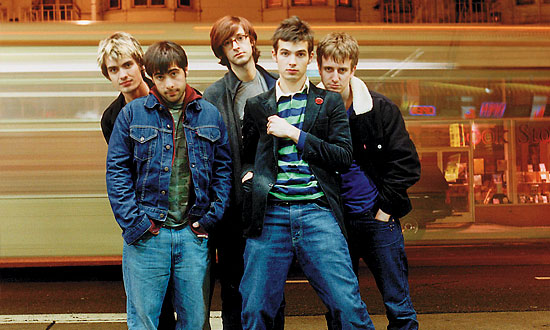 Phantom Planet singer/guitarist Alex Greenwald is a young man but far from an angry one. Even when defending the quintet—which includes guitarist Jacques Brautbar, bassist Sam Farrar, guitarist Darren Robinson and drummer Jason Schwartzman—against the mistaken perception that they’re just Hollywood actor kids undeserving of major-label status, the 22-year-old does so calmly.

“I haven’t had anyone come up to me and tell me I’m some sort of asshole who’s had it easy,” says Greenwald, who appeared in the 2001 cult film Donnie Darko; Schwartzman, of course, starred in Wes Anderson’s beloved Rushmore three years earlier. “If someone thinks that we’ve had it easy, let them keep thinking it. It’s not true. We’ve spent eight, almost nine, years making this band a band. Whether we’re good or not, we’ve been doing it for a long time.”

Written with what Greenwald calls “intentional optimism” during a time of atypically inclement West Coast weather, Phantom Planet’s second record, The Guest (Epic), is loaded with cheery pop songs. The best of the solid lot—the soaring “California” and the aptly titled “Anthem”—are unapologetically hopeful, and silly as it seems, even lyrically downcast tunes like “Lonely Day” positively beam.

“Being from California, the stereotypes are that it’s warm all the time and always sunny and happy,” says Greenwald. “But when we were making the record, it was wintertime, and it was raining. It wasn’t so sunny, but we still had the sunny in us. That’s a horrible analogy, but that was the poetic device we used. The record is intentionally a spoonful of sugar, but there’s some medicine going down.”

After struggling to find the right sound for its 1998 debut, Phantom Planet Is Missing, the band was approached by noted producer Mitchell Froom to helm The Guest. Says Greenwald, “Mitchell had a set plan: ‘These 12 songs are what we’re going to record. We’re not doing any b-sides, and your schedule is going to be 12 to 8 p.m. every day.’ Mitchell was like a zookeeper—he knew when to let the cages open and when to bring us back in.”

Recording tracks for LP number three probably won’t happen until late this year, but future plans assuredly don’t include any acting gigs. Which is too bad, as the manic, floppy-haired Schwartzman is the natural choice to star in a Keith Moon bioflick. Were such a film ever lensed, Greenwald has a large co-starring role in mind: “Moon’s dealer.”