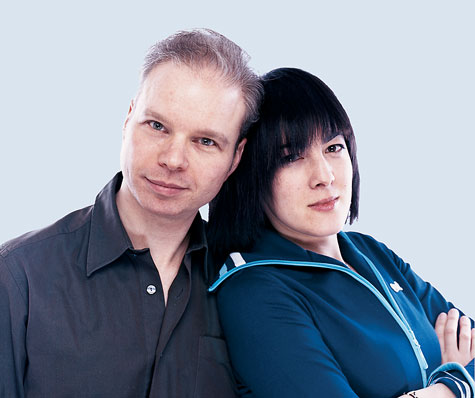 JORGE BEN “O Homem De Gravata Florida” (1974)
In the early ’70s, he made a series of albums of what might be called melancholy groove, driven by nylon-string guitar, hand percussion and vocal swing—no drum kit. When we went to Brazil, we came back with a stack of pirate editions, all of which were quickly worn out in our car. This track is from a legit reissue we recently found of Tabua De Esmerelda, which seems to be a concept album about alchemy.

MILTON NASCIMENTO “Pai Grande” (1970)
A sublime melody accompanied by a psychedelic percussion arrangement. We’ve been listening to 1970’s Milton and 1972’s Clube Da Esquina for inspiration for so many years that we know all the lyrics phonetically and often sing along at the top of our lungs. We must sound like Brazilian half-wits.

ROBERT WYATT “Old Europe” (2003)
This tune is an invocation of Paris in the ’50s: Miles Davis and Juliette Gréco flirting in a café while an understatedly hip horn section swings away. We listen to Wyatt for lessons in melody, harmony and humility. He’s the top, he’s the Coliseum …

EVERLY BROTHERS “I Wonder If I Care As Much” (1968)
From Roots, the fascinating concept album about the Everly family. The vocal harmonies are amazing, but so is the psychedelic production courtesy of Lenny Waronker and, one imagines, a studio full of stoned L.A. session players. Our favorite alt-country record.

TIM BUCKLEY “The Dolphins” (1968)
We often listen to Buckley’s live recording of “Dream Letter” on the way to gigs to psych ourselves up; we titled our live album Song To The Siren in tribute. On this track, he deepens his voice a bit for a baritone blues, like in Fred Neil’s original. Buckley’s voice can do anything, and the band is equally supple here.

SCOTT WALKER “Angels Of Ashes” (1969)
Scott 4 is another album that has lived in our car so long that there are stretches of highway that seem to carry it as a permanent soundtrack. Once all music is trapped inside computers, people will play this album to hear what real instruments in real rooms sounded like—except they only sounded like this on Walker’s albums.

YAMAZAKI HAJO “Tanjo Iwai” (1976)
Yamazaki is a singer with a tiny body and a deep alto who sounds like she’s about to fall apart. We suspect she may not be considered very cool in Japan, but this could be a case where it’s an advantage to not fully understand the lyrics. We know just enough Japanese to make out the chorus on this one: “Today, it’s my birthday.” Her tone makes it clear it’s not a happy one.

TOMOKAWA KAZUKI “Watashi No Hana” (1993)
Another great Japanese singer, Tomokawa is also a painter, gambler, movie actor and famous drinker. We went to see him play at a bar in Tokyo. He heard we’d been covering this song of his, and he made jokes about us all evening. None of our friends would translate them for us. He treated us to pint glasses of his favorite drink, Jack Daniel’s and soda, and we soon became almost as drunk as he. We thought we might get away with singing this song, because it’s one of the few that doesn’t incorporate his trademark shriek, which can emerge out of the middle of even the softest passage.