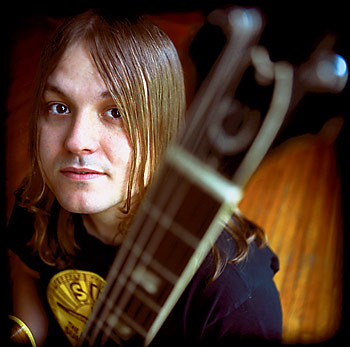 Throughout Superdrag’s decade-long run (the quartet went on what’s likely to be a permanent hiatus in 2003), Davis acted the stereotypical part of hard-living frontman. “A lot of people can drink like they have some sense,” says the 30-year-old Davis from the Nashville home he shares with wife Wendy and newborn son Paul. “I can’t. I have to be that person sitting in the back of the van listening to George Jones, trying to see how fast I can drink a liter of whiskey.”

During the recording of 2002’s Last Call For Vitriol, Davis’ alcohol intake, combined with poor eating and sleeping habits and long days in the studio, resulted not only in erratic behavior but also serious health issues: His liver became toxic, and his skin turned a shade of jaundiced yellow. On Nov. 11, 2001, while driving to be fitted for a suit to wear as part of his New Year’s Eve wedding festivities, Davis underwent a spiritual transformation.

“I definitely didn’t get in the car planning on becoming a Christian in the next 15 minutes,” says Davis. “But little by little, I started to feel this sense of distress or duress. It dawned on me that God was dealing with me. Before I had a chance to think about doing anything, I started to pray. There was a big void inside my heart somehow. It was the weirdest thing; in that instant, I suddenly knew it would never be filled with Gentleman Jack. All at once, this floodgate of emotion opened, and I was able to admit to myself that I was worn out and worn down. I remember specifically asking for peace. I was tired of fighting, tired of running.”

After fulfilling his Superdrag obligations in a healthy emotional and physical state (he even quit smoking, his favorite vice), Davis channeled this rebirth into his self-titled solo debut (on Rambler). Plainly stated, it’s a Christian rock record, a thirtysomething symphony to God that travels a fairly familiar musical path: prototypical Superdrag power pop (“Nothing Gets Me Down,” “Too Far Out”) mixing with lush Brian Wilson soundscapes (“I Hear Your Voice,” “The Kind Of Heart”) and catchy, Beatlesque melodies (“Me & My Girl”), as well as forays into blues and country. Superdrag aficionados might find it perplexing to hear Davis singing about his faith so directly and passionately, but he’s prepared for that reaction.

“It’s hard to look back on 10 years of working and building a thing and then turn around and do something you know will turn people off,” he says. “The best I can hope for from Superdrag fans is a fair shake.”

Davis is a man finally at peace, one who wants to share—but not preach about—his supernatural fervor. “A record isn’t going to save anyone,” he says. “But a record can be a platform. Mine says, ‘Here’s a guy, and this is what he believes about Christ. This is who he believes Christ to be.’ I’m not a missionary or an evangelist. But I feel my music is a ministry because of that one kid who walks up to the T-shirt booth and wants to know what you’re going on about.”