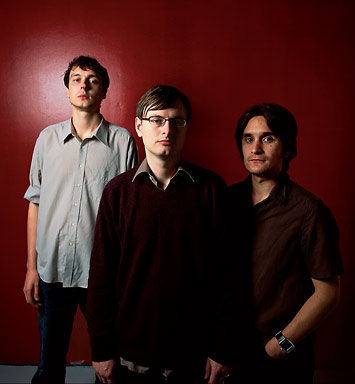 Nick Talbot’s punk moment had nothing to do with a teenage riot, a Clash double album or a mosh-pit injury. Talbot, the songwriter and multi-instrumentalist behind Gravenhurst, had his musical epiphany while listening to the pastoral psychedelic hum of Bristol, England’s Flying Saucer Attack and Movietone.

“It was the first time I heard really lo-fi, four-track music pressed onto vinyl,” he says. “Before then, I’d been listening to Stereolab and My Bloody Valentine, bands that spent a lot of money on recording. It’s very liberating to hear a good album recorded for nothing in a bedroom.”

In 1996, Talbot made a beeline to Bristol to attend university and put together his own band, Assembly Communications. Just as the quartet was getting off the ground, however, bassist Luke Gale was fatally struck by a car while riding his bicycle. Talbot details an eerie sequence of events that preceded his bandmate’s death in October 1999:

“The last show we played with Luke was (at a festival) in Liverpool, and in the brochure for it, he was cropped out of our band photo. Then, after the show went really well, we joked, ‘What could go wrong now? Well, one of us could die.’ A week later, Luke died. A review of the show came out the next day in the NME—written before he died—and it was meant to say, ‘the glorious and soon-to-be-ignored-no-longer four-piece Assembly,’ but someone had put a comma in the wrong place so it read, ‘the glorious, soon-to-be-ignored, no-longer four-piece Assembly.’ You can’t make that up. If I were a superstitious person, I would not be able to deal with this.”

Talbot coped by forming Gravenhurst. The name may suggest something out of Harry Potter, but it’s actually borrowed from a song title by Pullman, a late-’90s Tortoise side project Gale had been listening to. With Gravenhurst, Talbot used the light of Nick Drake’s solitary Pink Moon to navigate the self-recorded bedroom pop of 2002’s Internal Travels and 2003’s Flashlight Seasons. The latter was reissued by the Warp label, which signed Gravenhurst and recently released Fires In Distant Buildings.

The album is a massive amplification of Talbot’s downer folk/pop. With its mammoth guitar-riff crescendos and hypnotic krautrock rhythms, Fires is a proud sonic cathedral on par with recent constructions by Mogwai and M83. The album’s closer, a cover of the Kinks’ “See My Friends,” takes the song on a nine-minute trip with the Velvet Underground and Spacemen 3 as tour guides. Twee-pop trainspotters will note Talbot’s choirboy-vocal resemblance to Robert Wratten (Trembling Blue Stars, Field Mice), but Belle And Sebastian’s Stuart Murdoch is another apt comparison.

“I’d love to be able to pull off the chilling scream Bob Mould has on Beaster,” says Talbot. “My singing style came out of being into Simon & Garfunkel and really not wanting to sing at all. My favorite singer is Sandy Denny. I’m really into pop music, and I don’t want to lose that.”