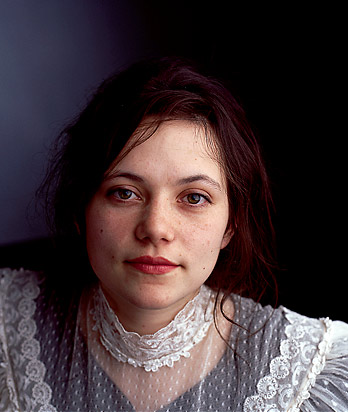 One thing you can say about Shelley Short: The girl’s got a thing for titles. Where, for example, did her career begin?

“The Second Annual Holiday Hot Dog Rodeo,” she says in the same little-girl voice in which she sings. “It was just a bunch of singer/songwriters; they each played three songs. I didn’t have any songs, so I wrote two.”

Short, a Chicago resident whose third full-length has just been released by Hush Records, admits she spent weeks trying to find a suitably stirring moniker for it.

“You want to hear it and go, ‘That’s it,’” she says with a squeak. Searching for inspiration, the 25-year-old Short called a friend who listened to her read off the album’s song titles and spontaneously combined “Tomorrow Night,” “Wild Wild Horses” and “All Eyes On The Skyline” (originally called “Good Morning Captain”) into Captain Wild Horse (Rides The Heart Of Tomorrow).

Short’s tea-kettle vocals can also be heard as a combination of sweet folk/rock females: Victoria Williams, Juliana Hatfield and the Innocence Mission’s Karen Peris. Such music often veers off the rails into cutesy, annoying territory, but Short succeeds with inventive phrasing and solid lyrics. “On The Waterfront” was inspired by the Marlon Brando film, and the politically motivated “Roaring Roars” borrows the melody of “When Johnny Comes Marching Home.”

On Captain Wild Horse’s most layered tune, “Lupine Manner,” Short plays keyboards with a ringing, toy-piano tone. Her lyrics look like nonsense on the page, but they possess a certain loopy power when sparked by Short’s sweet singing: “I’m building bridges over water and ditches, my blue-printed mind is entirely solid/Bite down mistakes, but don’t swallow your sorrow, the sadness will dwindle and eyelids will rise/Wildwood flower, sorrel sour, lupine manner, wildwood flower.”

“The Carter Family are so great,” she says before asked about the nod to one of their most famous tunes, “Wildwood Flower.”

Aware that the high coo of her voice can creep some people out, Short—like another one of her influences, Bob Dylan—has become her songs’ best singer. The fit between her lullaby vocals and her rustic folk/pop songs is what makes her acid-flashback-titled album work.

“I love country and wouldn’t mind being country, but I feel like this new record is folk,” she says. “I guess I sing the way I talk. I think a lot of folk singers do that. I like singing sad songs. I feel like most songs in the world are sad. Uplifting but sad. Hopeful but kinda sad.”

Saw Shelley recently in Hobart with Darren Hanlon. I enjoyed the smooth soaring ride of her vocals. I also like the quality of her voice, met her and told her so. Thanks Shelley all the best