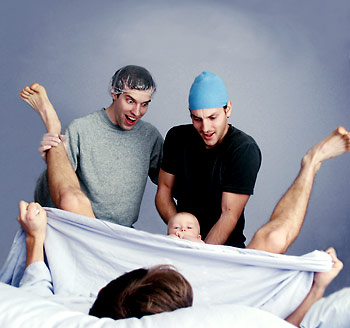 If you’ve ever attempted to bust a move to Mogwai or the Kronos Quartet, you might be aware that a pop-and-lock routine just won’t do. Modern-dance troupes, however, have found the cinematic end of the underground-rock scene useful, commissioning music from Washington, D.C.’s Tone and Portland, Ore.’s Menomena.

Tone, a 15-year-old instrumental ensemble whose members’ lineage stretches back to punk bands the Teen Idles and Government Issue, began working with the Bowen McCauley Dance Company in 2004. In January, Tone provided the music for Amygdala, a Lucy Bowen McCauley performance at the Kennedy Center.

“My wife is a dancer and has been pushing me for years to explore the possibilities of what can happen when girls in tights meet boys with instruments,” says percussionist Gregg Hudson. “I was skeptical at first but found myself making a deeper connection to the world of dance each time I saw a company performing to intense modern music.”

Portland troupe Monster Squad enlisted Menomena to compose music for Under An Hour, a three-part performance staged Sept. 11-13, 2004. The work was initially inspired by the U.S. government’s reaction to terrorist attacks (“under an hour” is the military’s response time for a counterattack). Menomena wrote three long instrumental pieces for the project, the recorded versions of which are available via the Film Guerrero label.

“Modern dance was a pet peeve of mine for a while,” says guitarist/saxophonist Justin Harris. “I went to an art school in Portland, and there’d be kids wanting to do performance pieces and call it modern dance—and it was awful. For one, everyone would have to get naked. Then they’d cover themselves in mud or flail around. [Monster Squad’s dance] opened my eyes to a whole new level—maybe a professional level—of modern dance.”

While each band has new recordings out this year (Tone’s Solidarity was recently issued by the Neurot label, Menomena has just finished its sophomore album), working with dance was a welcome stretch.

“Experiencing the two art forms combined is almost an overload on the senses,” says Hudson. “But sometimes that’s necessary to remember that people are capable of amazing and profound things.”