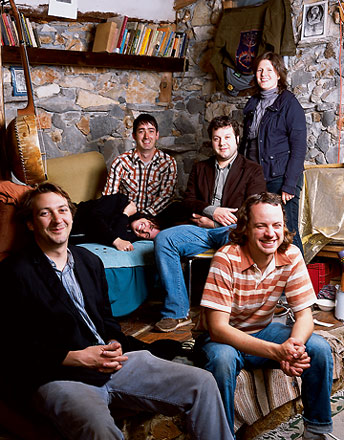 “It goes back to the roots of the more psychedelic aspects of the band that were really more prominent early on,” says Laura Carter, who plays guitar, keyboards and accordion. Passages of trippy, Eastern-tinged guitar and cello appear on “Under The Northern Sky” and “An Old Familiar Scene,” and a snake-charmer clarinet floats through “Somewhere Down The River.”

“This one came out to me as a dark, orchestral folk/rock album,” says Rieger. “I bought an acoustic 12-string guitar that I started playing a lot, and that changed the way I wrote. I was listening to a lot of gypsy music and Middle Eastern stuff, and you can kind of ape that sound with the 12-string a little bit.”

Though the fascination with sitars and drones is often associated with the late-’60s era’s penchant for mind-altering substances, Rieger credits endorphins for unlocking his imagination. He quit smoking a year and a half ago and started going on eight-mile runs along Athens’ Oconee River.

“When you get going, running kind of gets you high,” he says. “You enter into a little different consciousness, and that’s the time when I came up with a lot of the lyrics.”

Stamina, it turns out, has been key for Elf Power. The six-piece is one of the last bands standing among the Elephant 6 collective of lo-fi neo-psychedelic Southerners. Rieger attributes the longevity to having a single principal songwriter, which reduces personality conflicts. Other members have come and gone, but Rieger and Carter have soldiered on and expanded their elfin realm with extracurricular activities such as the group’s Orange Twin label.

“When we first started the label, we had our heads completely up our asses, as far as knowing what to do,” laughs Carter. Since 1999, Orange Twin has released albums by Jeff Mangum (Carter has played with Neutral Milk Hotel) and local artists such as Jack Logan, along with reissues and rediscoveries such as Sybille Baier’s ethereal Colour Green.

In addition to the band, label and part-time work at a law firm, Carter oversees the Orange Twin Conservation Community, a 100-acre eco-village outside of Athens. The OTCC plays host to a concert each fall, with 2005’s bill including the Tall Dwarfs and a reunited Olivia Tremor Control. Last year, Carter also served as the general contractor when the Orange Twin community moved a house to its property, which in turn will allow them to erect a permanent stage.

“We like to keep busy,” says Rieger, who sat in on guitar with the Minus 5 for a performance at this year’s SXSW festival. “I don’t like to be idle. I get bored.”