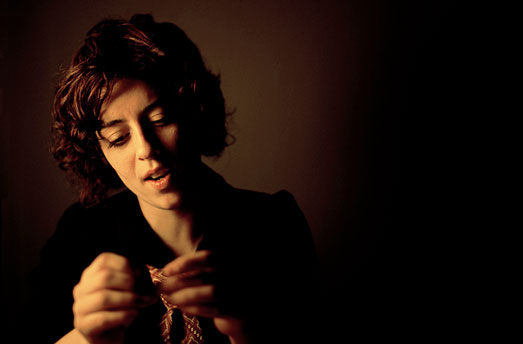 “I had this insane wanderlust growing up,” she says in a slight Midwestern accent that’s more Fargo than Chicago, where she now resides. “My father hasn’t flown on an airplane for 25 years and probably only once in his life.” Still, Berner defends her hometown as a great place to grow up, if only because her creative side could better flourish in the absence of big-city distractions.

Then again, abandoning small-town comforts can also foster some large-scale lessons. Look no further than the underlying theme of “A Town Called Happiness,” a rollicking, acoustic-guitar-and-harmonica-fueled track on …This Side Of Yesterday (Machine), Berner’s sophomore album. Despite her dog-eared passport, the titular burg is more a mindset than a locale.

While living in San Francisco, Berner’s car collided with a small passenger train. “It clipped me on the right corner of my car and spun me around,” she laments. “I was just sitting there in the bright, white-light sun in my totaled vehicle. It was just the idea of, ‘God, what I wouldn’t do to be anywhere but here right now.’ That’s the inspiration behind that song.”

The casual listener might not glean that message from her lyrics, which tend to bury their meaning in metaphors. In the actual song, her wreck takes the form of two hitchhikers hoping for sunnier climes. The only allusion to her own misfortune appears near the end when she sings, “And you’re still misbelieving/You didn’t see the train.”

Berner’s musical touchstones are more clear-cut. Think Natalie Merchant with fewer adult-contemporary leanings or Aimee Mann on a folkier trip. Berner’s voice can thicken and thin like Joni Mitchell’s, and it’s unmistakably her greatest asset. On “Good Company,” her twangy vocals soar high above a twinkling piano and skittering drumbeat as she insists, “Good company is hard to find.” Rightly so, the song was penned prior to a return to Williams Bay.

“I’m a bit of a loner, and I’ve got a bit of a melancholy way about me,” she explains. “The older I get, the more I realize a lot of it comes from having taken off and started traveling so young, because you learn pretty quickly how to become your own comfort.”

So how does Berner account for the collaborative spirit behind …This Side Of Yesterday, an effort that boasts 11 guest musicians?

“See, I’m a Gemini,” she laughs. “So I can be a total loner and a huge socialite at the same time.”