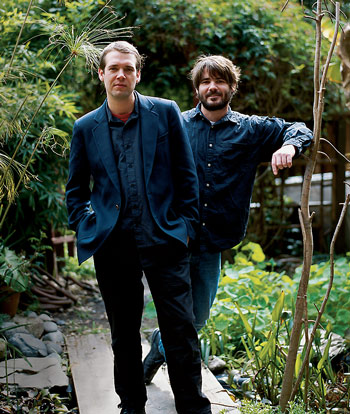 “It’s kind of like a rapper just relying on a beatbox,” says Greg, 34, of the duo’s under-indulgence. “I don’t think we intend the songs to be a certain way, but I like the simplicity of just the one guitar and our voices.”

Thom, 31, views their configuration a little more pragmatically: “I guess it just sort of works without a rhythm section, and it’s cheaper. More convenient.”

The L.A.-reared/Oakland-based brothers—who share a house and have made music together and apart in projects such as Sandycoates, Nedelle And Thom, Thumb Of The Maid and Owl & The Pussycat since the mid-’90s—haven’t always sounded so spartan. 2001’s Colossal Small and 2003’s On & Out—both released on Amazing Grease, the label run by Scott Kannberg (Pavement, Preston School Of Industry)—share the dreamy, melodic slant of Murdered By, but their songs were presented in traditional rock-combo style, with bass, keyboards and drums.

Stripping down to the bare essentials of their live show for 2004’s Now Is The Time For Love—recorded in two nights, using one guitar and the Moores’ voices—was a stroke of addition-by-subtraction genius. The songs and sonic presentation are simple, intimate and warm. It’s what the demos for Simon & Garfunkel’s Bookends might’ve sounded like.

By comparison, the seven days spent crafting Murdered By might seem like a studio binge of Chinese Democracy-esque proportions. But the gentle brushwork pacing “Star Of Confusion” (with a quick fade-out that’s pure oldies-radio gold) and the synthesizer drone and piano twinkle on spacey opener “Wish You’d Say” are as indulgent as the Brothers get.

While the fraternal timbre of their harmonies and the plucky acoustic guitars do the work of a full band, the Moores aren’t married to the hootenanny approach of Now Is The Time and Murdered By.

“I could see in the future having a band again,” says Thom. “If we felt a song really needed a bass or a Hammond organ, we’d go out and find someone to play it.”