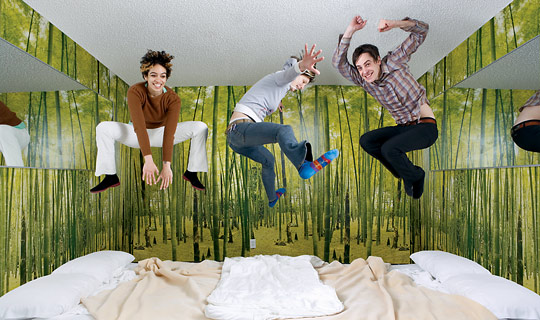 Recording a politically charged album in 2006 is an effective way to get lost in the shuffle. Gone are the days of left-wing outspokenness being relegated to crappy hardcore bands; if you want to raise eyebrows, release an album that shuns politics altogether. The Thermals, who toyed with politics on 2004’s Fuckin A, are inviting misconceptions with the new The Body, The Blood, The Machine (Sub Pop). The prominence of religious-themed lyrics among the political fare has prompted some to believe the Portland, Ore., band had crossed over to the god squad.

“At first, a couple of people thought that,” says singer/guitarist Hutch Harris. “Someone at Sub Pop said, ‘I see you guys are getting back in touch.’ I just said, ‘You might want to listen to the lyrics again.’”

The religious themes surface immediately; take the first verse of opener “Here’s Your Future”: “He said fear me again, know I’m your father/Remember that no one can breathe underwater/So bend your knees and bow your head/Save your babies, here’s your future.” But attentive listeners will notice that Harris’ conceptual focus is on an alternate, almost science-fiction reality in which Christians rule the world with an iron-fisted theocracy.

“Some of it is definitely based on fact, but it’s more fictional thinking, a story based on Christians taking over the country and the need to simply get out,” says Harris. “Things could be worse. You can’t live in China and put out a political record; they’ll come and snatch you up.”

Harris, Kathy Foster (bass) and Jordan Hudson (drums)—all Portland scene stalwarts—formed the Thermals in 2002. The band’s criminally catchy, punkish indie rock quickly endeared itself to the members of Death Cab For Cutie, who boosted the Thermals to a Sub Pop contract within months, resulting in 2003’s frantic More Parts Per Million. With brevity and hooks that elicit Guided By Voices comparisons and a distorted volume that’s ’90s indie rock through and through, the Thermals provided a much-needed jolt to an underground saturated with unimaginative ’80s new-wave throwbacks and post-punk retro robots.

Two albums later, the Thermals have gone through a few expected changes. In February, the band joined the ranks of underground artists (Four Tet and Trans Am, among others) that have issued a “no thanks” to Hummer regarding the use of a song for a commercial. (The SUV manufacturer wanted “It’s Trivia” from More Parts.) As for lineup changes, the drum seat once occupied by Hudson now belongs to Caitlin Love, formerly of Desert City Soundtrack. Some tracks on The Body, such as the five-minute “Power Doesn’t Run On Nothing.” are epic by Thermals’ standards, and the album is the first to feature a true outsider (Fugazi’s Brendan Canty) behind the controls. (Harris recorded More Parts, and Death Cab’s Chris Walla produced Fuckin A in four days.) Still, the most obvious difference is the concept behind The Body, which Harris casually downplays.

“It’s not a message record in that I’m not looking to get anything back from it,” he says. “If it’s seen as political, that’s fine. If it’s seen as entertaining, that’s great, too.”