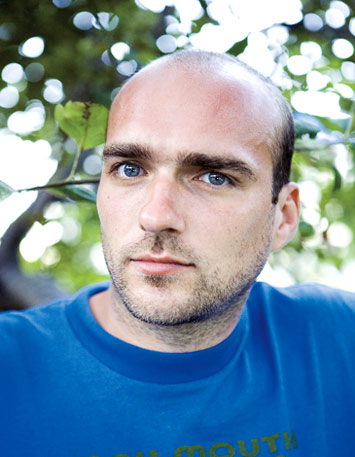 Return Of The Frog Queen seemed pretty bleak, but on World Waits, there’s definitely a heightened sense of peacefulness and confidence.
Wow, good to hear.

Are you happier than you were back then?
Oh, yeah. A lot happier. It’s not that I was unhappy back then, but I definitely was a younger man, reaching for something … reaching for the unknown, I guess, trying to find my place. The older you get, you drop the baggage of life. Believe me, I still have baggage, but some things don’t matter as much, and other things start to matter more.

Like what?
Like peace, and trying to be more content with yourself and getting rid of that anxiety. Trying to believe in yourself and accepting yourself. I sound like a weird psychology lesson, but it’s true.

You’ve been given a hard time in the past for your singing being unintelligible. This time around, your enunciation is totally clear. Does that stem from a greater confidence in your lyrics?
Maybe. And also just the desire to say something a little more profound, if it is profound at all. That comes from a John Lennon influence; I really wanted to start saying things during the Fire Theft. That came from the pressure of not working with Dan (Hoerner, guitarist/co-writer in Sunny Day Real Estate) anymore. There was an incredible amount of pressure to say something, so I actually sit down now and write lyrics—and beat my head against a wall if I have to—to get something to come out.

You’ve been working with the same core group of musicians—in Sunny Day and the Fire Theft—since the early ’90s. Is it disorienting to not have their input when you’re doing a solo album?
It has been, but I think it’s to the point now where I’m not as worried about it. After Frog Queen, I was really concerned that I just couldn’t write good music, because I was used to working with these guys. Shortly after that, I joined up with Sunny Day again. That wasn’t the full reason I joined again. It’s not as big of a deal now because I believe in [my solo work] more, and I know that what I do is what I do—and there’s really nothing I can do to change that. The luxury of this is complete freedom and complete control. Freedom to just say, “This is how it is,” and everybody’s got to accept it. [Laughs]

“Cannons” (from World Waits) is about you being a night owl.
Something happens after 10 or 11 o’clock at night; I just wake up, and it doesn’t matter if I got up at five that morning. I’m a total vampire. I have a tendency to stay up so late sometimes that I’ll neglect some of my responsibilities the next day because the world starts early, and I typically don’t. Or, I start really early. It’s nice to work, hang out with your friends and to think when the world’s quiet. That’s when the creative process really kicks in for me, which can be difficult as a musician. You want to make noise, but you have neighbors or roommates who are asleep.

Have you gotten complaints from neighbors?
Oh, yeah. Currently I live in a townhouse (in Seattle), and I have a neighbor next door who’s a police officer. [Laughs] I was in my room at three in the morning one night, just going off, playing piano and singing. I got a huge pound on the wall, but continued to play, like a fool. I heard a knock on the door, but I was like, “There’s no way I’m going to the door.” I ended up stopping at that point, but then my landlord called the next day saying, “It’s too loud. You can’t play past 10.” Which I since then have respected, because my neighbor is a really nice guy. He’s been really patient with me. But, you know, he’s also a cop. [Laughs]

There are a lot of chart-topping bands making music right now that owes a huge creative debt to Sunny Day Real Estate. Are you at all aware of your legacy in that?
I’ve heard about it. But when I hear some of these bands that are supposedly influenced by Sunny Day, it’s like night and day, a completely different sound. I feel like these bands that are influenced by us have created their own genre of music that I was never really a part of … I guess obviously I was, but it’s like anything—I’m hugely influenced by U2, but I doubt my music sounds too much like them. They’re my favorite band in the world, but I probably don’t sound a lot like them. I probably sound more like the Beatles than I do U2.

You don’t enjoy any of the emo-ish pop bands that descended from Sunny Day’s style?
It depends on the band. I probably haven’t heard most of them. I mean, no offense to those guys. To each his own. They’re probably a lot better at being musicians as far as playing the game and getting out there and having a lot of charisma. And that’s what has brought them where they are, whereas Sunny Day or myself has always had a tendency to be a little … unavailable. That’s partly intentional and partly not. We had this thing that was all about the music, and that’s all we wanted to be recognized for.

Last year, Sinéad O’Connor told MAGNET that she wanted her music to be spiritual but the idea of making Christian rock would just horrify her. You’re also up front about your spirituality, but you seem pretty removed from Christian rock.
Well, Christian rock seems to sell God. No offense to Christian bands—that’s my little disclaimer, always: “No offense, guys!” But yeah, I am a spiritual person. I totally agree with her comment. It tends to become a formula and not from the heart. In fact, I was having this conversation last night with somebody, how you start going through the motions if only to impress your Christian brethren and sisters. You’ve got to speak it from the heart, if you truly have this relationship or feeling, you know—tell the truth. A lot of the lyrics are always just the same praising. There’s nothing wrong with praising, but I have no problem wrestling with God. Or wrestling with the idea of God. I think it’s good to doubt. I think it’s good to look at the other side of that, as opposed to doing the formula, just doing it to make yourself look like you love God. And that’s really only to impress your fellow Christians, you know?

Did you notice a shift in your fan base after you announced your conversion to Christianity?
I didn’t notice anything, because when I announced it … I’ve always sorta been a Christian. I just had an epiphany one day and wrote this big letter. Sunny Day was the big buzz at the time, or one of the bands that a lot of people were looking at. The fan base and the buzz alone was pretty big, so I didn’t really notice a huge change. It became a hot topic, as opposed to making more fans or sending other fans packing because they just didn’t agree. It became a discussion, really, which is great. Which is fine with me. I had a revelation. I had an epiphany, and I exploded in such a crazy way that it’s funny how that evened out. It’s not a giant flame anymore; it’s like a slow-burning fire that’s going to last a lot longer.

I’d imagine that if you sang in church, people might take notice.
I used to go to a youth group, and when I first got there, people were just excited that this guy they’d heard about was really into God. And we would sing a lot, but it was a family. People didn’t really take notice of me singing. They treated me as a friend and a brother, you know? And I got lost in the spirituality, and I got lost within the praising and the worship or whatever. And the whole guise of me being a music guy just faded away. I became a person, which is the best thing. There’s a myth, but I’m just a dude.

One reply on “Q&A With Jeremy Enigk”

Jeremy i love your music and sunny day real estate, i cant even begin to say how many dark and ruff times sunny day has got me threw. Im a christian aswell and have been an avid follower of sunny day since 2001, im 26 now and still listien to sdre everyday. I play the track one each and everyday before work and before any big race(im a marathon runner) Jeremy and sdre has played such a big part life, i just cant imagine what life would have been without u guys. God bless you jeremy.