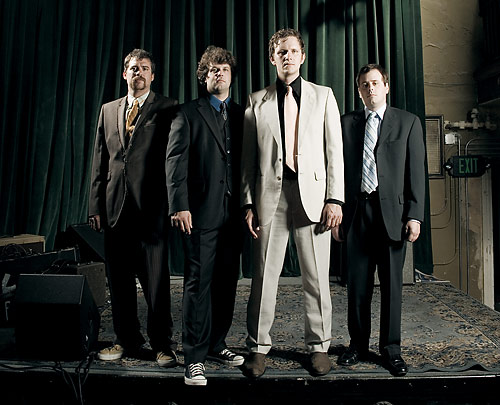 Thom Moran feels like a born-again musician. After recovering from a near-fatal stab wound suffered during a mugging in Boston seven years ago, he began to grasp his life’s ambition.

“There’s something to the stereotype of near-death experiences really putting into focus how short life is,” says the 30-year-old Bon Savants singer/guitarist. “You can either do a lot of things OK or a few things really well. I finished school and decided I’m gonna play music.”

Moran and Bon Savants co-founder/guitarist Kevin Haley met as teenagers in Frankfurt, Germany. A stint in the Air Force had Moran stationed abroad, while Haley was a military brat looking to start a band. The two bonded over Pavement and Pulp, then formed a post-punk group called W.H.Y.

“Most rehearsals,” laughs Moran, “we just tried to see how close we could get to being Fugazi.”

Fast forward to 2003: Moran is coordinating sub-orbital rocket tests at the Massachusetts Institute of Technology. Haley is bouncing around Texas and Colorado until Moran convinces him to move to Boston. A Craigslist post corrals bassist Dave Wessel, and the trio recruits Berklee-educated drummer Andrew Dole by way of another Internet post, reading: “Need a drummer to play Middle East (a Cambridge, Mass., venue) covering Pulp. I can’t believe we haven’t found somebody to do this already.”

Bon Savants are born shortly thereafter, recording Post Rock Defends The Nation on ProTools and sending the disc to Bill Racine (Rogue Wave, Mercury Rev) for final mixing. The self-released debut embodies Moran’s second-chance sentiments. On album opener “What We Need,” Moran laments the one who got away in his best Stephin Merritt baritone. He revisits his brush with the Reaper on the title track, proclaiming, “I bled to death on a neighbor’s lawn.” Little else on Post Rock Defends The Nation is as morbid, but there’s a level of obliqueness heightened by peculiar phrases (“Oh, you kiss like a Russian,” “I am the atom bomb”) coupled with images drawn from Moran’s scientific background (“Feel a charge in your matter like an electrical storm”).

The band members’ Pulp fascination figures into Post Rock Defends The Nation, as does Haley’s resounding, Interpol-esque guitar work. As fate would have it, Haley—responsible for co-writing many of the album’s 11 tracks—recently left the band under amicable terms. (He was replaced temporarily by guitarist Bek Zaganjori; guitarist Craig Hendrix and keyboardist Brian Hamilton have since joined Bon Savants.)

“You don’t want to try what you did before,” says Moran concerning Haley’s departure. “It’s never gonna be as good as it was that way, but maybe better in a different way.”