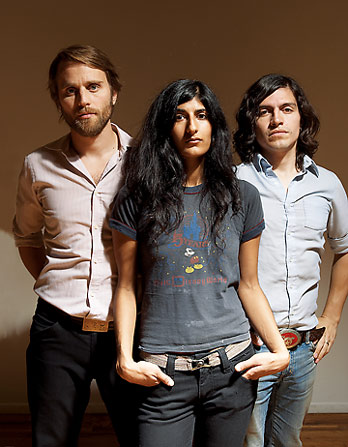 “It’s such a fine line between stupid and clever,” Michael McKean correctly observed in the 1984 film This Is Spinal Tap. More than two decades later, the Big Sleep—in all possibility, The Loudest Band In Brooklyn—straddles the equally fine line between the silliness and utter sharpness of Rob Reiner’s gut-busting, rock-mocking classic. First and foremost: the volume.

“The main thing for me is physical impact,” says guitarist Danny Barria of his group’s much-lauded live presence. “Not just having people hear it, but having them feel it.”

When the time came to translate that clothing-quivering throttle into recorded form—for Son Of The Tiger (Frenchkiss), the band’s full-length debut—Barria decided to forego amps that go to 11 in favor of a safer, more familiar fix. He hired his band’s soundman, Kevin McMahon, to produce the album.

“It can become an antagonistic thing with the sound guys,” laughs Barria. “We’ve been around New York enough that clubs know who we are, and Kevin knows almost everybody. He’s a big part of what we do.”

Pummeling amplitude aside, there’s also the issue of percussionist attrition. Barria and his wife, singer/bassist Sonya Balchandani, while not quite approaching Judas Priest territory, did run through two drummers before making Son Of The Tiger. But Barria stresses that both former members left on good terms.

“The first just couldn’t stand the city, and the second also played with the Hong Kong and couldn’t devote time to both bands,” says Barria. “It was a blessing though, because once we got Gabe (Rhodes), everything clicked.”

Starting out as an instrumental outfit, the trio discovered that some of the tracks on Tiger called for vocals. Enter Balchandani, a first-time singer whose gentle lilt graces four songs and conjures a guileless Emily Haines or an earthy Georgia Hubley.

It’s Balchandani’s bass-playing, however, that does the Big Sleep’s heavy lifting. Pacing a propulsive lockstep with Rhodes one minute (as on exhilarating opener “Brown Beauty”) while turning meditative and introspective the next (the Tristeza-like refractions of mood piece “Menemy”), her versatile undercurrent recalls some of the more fluid rhythm sections in recent memory (…Trail Of Dead, Sonic Youth). Barria says his biggest challenge is balancing the Big Sleep’s artier inclinations with the desire to rock listeners’ socks off.

“The question is always, ‘Are we just about volume, or are we trying to say something?’” asks Barria. “You don’t want to be just super-loud; there’s compelling content here. Besides, how much more loud could it be?”

The answer, of course, is none. None more loud.