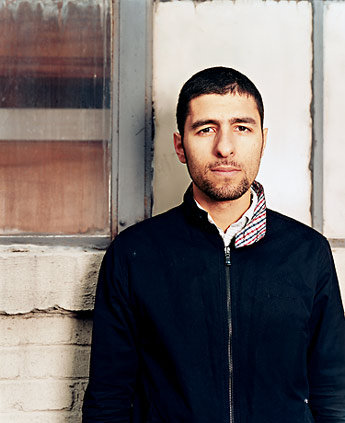 Only those patient enough to meet José González’s borderline-inaudible songs halfway—strap on the headphones, feel the Nick Drake vibe—will reap their considerable rewards. Unsurprisingly, González himself seems plenty patient. All the work he did way back in 2003 finally paid American dividends in 2006: His debut album, Veneer, captivated the acoustic-loving Swedish masses when it was originally released overseas, but it took two U.S. issues (by Hidden Agenda in late 2005 and by Mute in April) and a British TV commercial to ignite bigger fires. Once he got those embers burning, though, it was difficult to get people to shut up—but that wasn’t for lack of intra-audience discipline.

“Someone said I had a Nazi crowd,” chuckles González in his slightly halting English. (He was born in Sweden to Argentine parents.) “In Uppsala, two guys started fighting because one was talking and the other wanted him to shut up. They’re mostly quiet, but when you come to a place on a Friday night and people are drunk, they talk.”

González’s quietly building snowball gained momentum with appearances on Late Night With Conan O’Brien and Last Call With Carson Daly (twice!), but the biggest tubular help came via a Sony commercial that only aired in the U.K. The clip features thousands of colorful balls bouncing through the streets of San Francisco to González’s cover of the Knife’s “Heartbeats.” It may not seem the most likely way to find fans, but the ad enjoyed the sort of YouTube buzz generally reserved for the likes of the Star Wars kid. González seems merely tickled rather than actually excited by his success.

“I’ve been touring so much that I don’t really react,” he says. “It was really nice when I played in New York and Lou Reed came. And another day, the guy from Talking Heads… What’s his name? David Byrne. He’s been to two of my shows now. That was cool.”

Having spent so much of 2006 on the road, González will start the new year writing another set of contemplative quietude. “That’s the main goal: to have another album soon,” he says. “I feel like I can do the—what do you call it, fleshing?—with different projects. What I do best is just guitar and vocals.”